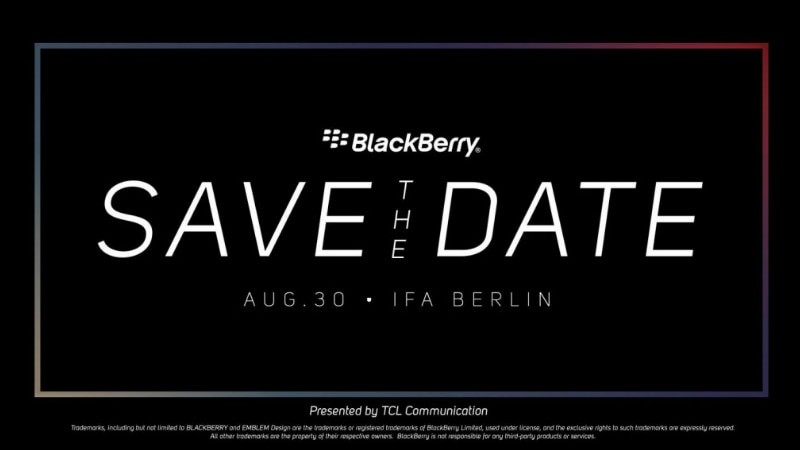 Toned-Down version of the BlackBerry KEY2 expected on August 30

The media invite doesn't give out any clues, and foreign media TheNextWeb reports that BlackBerry event will be held at IFA in Berlin on August 30. The BlackBerry Key2 LE, as mentioned, is expected to be a toned-down version of the BlackBerry KEY2. Leaked renders suggest that the keyboard will be similar to the one seen on the KEYone last year, and will not have the trackpad functionality. It is however, expected to retain the shortcut button on the KEY2.

Leaked specifications suggest that the BlakBerry KEY2 LE will sport a 4.5-inch full-HD+ (1080x1620 pixels) LCD panel, be powered by the Qualcomm Snapdragon 636 SoC, paired with 4GB of RAM. The smartphone will offer 32GB and 64GB of inbuilt storage. The BlackBerry KEY2 LE has been tipped to sport two cameras at the back - one 13-megapixel primary sensor and a 5-megapixel secondary lens. It may pack a 3,000mAh battery, and dimensions of the phone were leaked to be at 150.25x71.8x8.35mm, while the weight was pegged to be at 156 grams.

Last month, tipster Evan Blass suggested that the BlackBerry KEY2 Lite may be launched at IFA, and now that TCL has sent out invites, it could be possible that the toned-down version may be the KEY2 Lite and not KEY2 LE. At the time of leak, Blass said that the smartphone will have the same form factor as the BlackBerry KEY2, and will come in Red, Blue, and Copper colour options. This new variant will presumably see a downgrade in specs, sport a plastic body, and be launched with a cheaper price tag.

There's no word on which device will launch at IFA, its availability or pricing, but all shall be revealed on August 30.