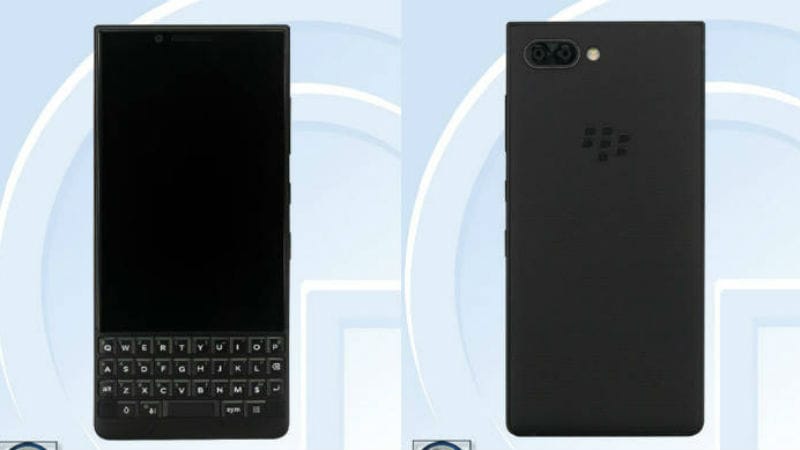 Announced on Twitter on Friday, BlackBerry will host a launch event on June 7 in NewYork at 10am ET(7:30pm IST) to officially announce the BlackBerry KEY2. As of now, there is no clarity on what BlackBerry will pack in the KEYone successor, but there is no doubt that it will have a physical keyboard, which was a massive part of the company's success in its heydays.

In January, BlackBerry Mobile President Alain Lejeune had confirmed that the company is working on at least two new smartphones for 2018. Last month, a mysterious BlackBerry handset, codenamed 'Athena', appeared in a Chinese certification site. The TENAA listing had revealed several specifications and other details of the alleged BlackBerry KEY2.

The TENAA listing showcased a dual rear camera setup on the BlackBerry handset that carried model number BBF100-4. Also, a few leaked images provided a closure look at its design and highlight all the key differences between the BlackBerry KEYone and its successor. As per the images available on the TENAA site, the smartphone will have a complete rubberised, textured panel on the back. This is contrary to the back panel on the BlackBerry KEYone that didn't have a textured design above the rear camera setup.

The QWERTY keyboard on the BlackBerry KEY2 is likely to support gestures and a multitouch-supported display that is expected to come in 3:2 aspect ratio. On the top, the smartphone could have a 3.5mm audio jack, while its bottom might have a USB Type-C port. The TENAA listing also highlighted that the handset has a 4G LTE and includes dual-SIM support.

Meanwhile, other leaked images had suggested that the KEY2 will have a plastic build. The keys on the full QWERTY keyboard of the handset also have a matte finish. Also, there are some rumours that the handset will debut with a Snapdragon 660 SoC, coupled with 6GB of RAM, and Android Oreo.

Ericsson Wants to Be the Frontrunner in Bringing 5G to India