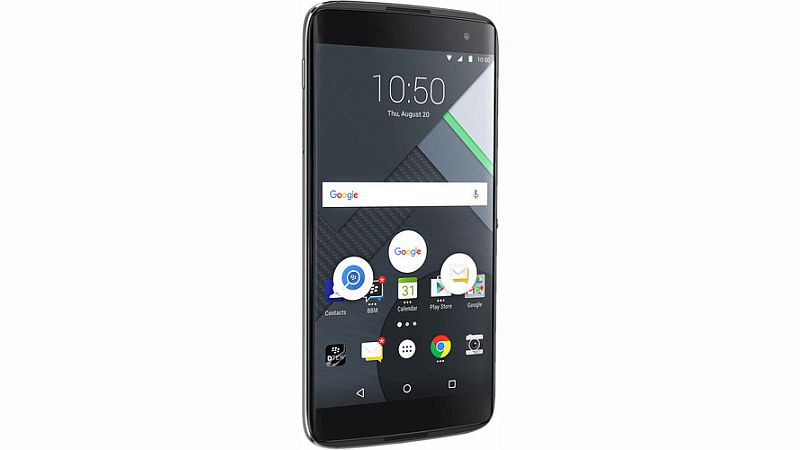 BlackBerry late last month announced that it won't make any smartphones and instead focus on its software business. The company said it would completely outsource smartphone design and production marketed under its brand. Now, the BlackBerry DTEK60 Android smartphone, which had leaked on several occasions earlier, has made it to the market via third-party retailers.

The BlackBerry DTEK60 Android smartphone was last month accidentally made public on the company's own website ahead of any official announcement. The official webpage with BlackBerry DTEK60 smartphone featuring some specifications was soon taken down by the company. The smartphone, said to be a rebranded variant of the TCL 950, has since then briefly made its way back to the company site, and was even spotted passing through the US FCC and the Wi-Fi Alliance. The smartphone is now available for pre-orders via a third-party online retailer, B&H Photo, priced at $499.99 (approximately Rs. 33,500). The online retailer clearly lists the handset as "Coming soon" and the shipping time as "Not available."

According to the online retailer, the BlackBerry DTEK60 Android smartphone features a 5.5-inch QHD Amoled display with 534ppi pixel density; a Snapdragon 820 processor; 4GB of RAM; 32GB of inbuilt storage; a 21-megapixel rear camera with PDAF and dual-LED flash, and an 8-megapixel front camera. It measures 153.9x75.4x7mm, weighs 165 grams, and runs on Android 6.0 Marshmallow. The handset is backed by a 3000mAh battery and supports Qualcomm Quick Charge 3.0 for fast charging. Connectivity options include Wi-Fi 802.11a/b/g/n/ac, Bluetooth 4.2, NFC, GPS, GPRS/ EDGE, 3G, and 4G. The online listing was first reported by Crackberry.

To recall, BlackBerry in July this year launched its second Android-based smartphone - DTEK50 - and called it "the world's most secure Android smartphone."