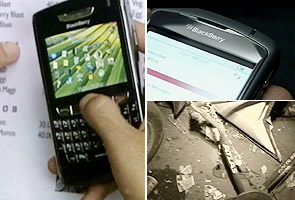 He said his smart phones were being unfairly singled out to score political points. But governments demanding access to BlackBerry's secure communications risk undermining the growth of electronic commerce in their jurisdictions, he warned in an interview with the Wall Street Journal.

"This (communication) is about the internet. Everything on the internet is encrypted. This is not a BlackBerry issue only. If they can't deal with the internet, they should shut it off.''

Part of the challenge before RIM is to educate foreign nations on how the internet and the BlackBerry service works, he said.

"We are going to continue to work with them to make sure they understand the reality of the internet. A lot of these people don't have PhD's, and they don't have a degree in computer science,'' he said.

The BlackBerry boss said, RIM was trying to convince these governments that the internet requires secure communications.

However, he said RIM would have to cooperate with authorities if it was handed a court order to do a lawful intercept of a person's communications. "I would give them the encrypted stream. It would have to be like a wiretap,'' Lazaridis said.

Citing security reasons, the United Arab Emirates, Saudi Arabia, Indonesia, Bahrain and India have sought access to encrypted emails which RIM routes through its own secure servers which have no master key. While Saudi Arabia is stopping BlackBerry from Friday, the UAE ban comes into force from Oct 11.

Meanwhile, RIM stock continued to bleed, slipping 2.18 per cent to close at $53.06 in the Toronto Stock Exchange Thursday. The stock has sunk almost nine percent in the last three days, plunging RIM's market worth by almost $3 billion in three days.
Comments

US to hold talks with India on Blackberry issue
A place where Ms. Pac-Man still has a home