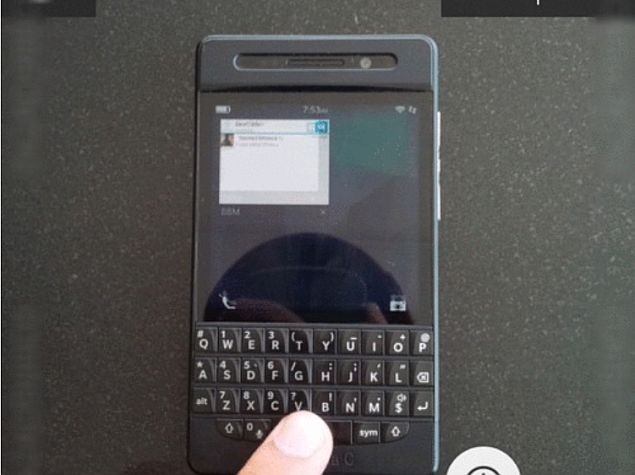 BlackBerry's next version of OS, called BlackBerry 10.3 OS, has again come under the spotlight with developers claiming to have spotted a new multitasking feature in the BB10.3 SDK beta on BB10 Qwerty phones.

The alleged new BB10 OS feature, posted by BBin, is seen in a gif image in which the 'spacebar' button on the Qwerty keyboard with a long-press is being used to minimise the on-going activity on the screen, view the open apps, and also navigate directly to the home screen.

This new feature is expected to work only with BB10 devices with hardware Qwerty keyboards, which currently consist of only the BlackBerry Q10 (Review| Pictures) and Q5 (Review) for now.

Another recent leak of the rumoured BB10.3 update showed off home screen app icons that no longer featured their box outlines, something users have complained about.

It looks like the company is also testing a virtual assistant for the new version of the BlackBerry 10.3 OS, as we spotted an icon for Intelligent Assistant in the screenshots that surfaced back in March. It is not known whether this will be voice-based, like Siri for iOS or Cortana. A smart search feature might also come with the new OS.

Other design changes seen in the alleged BB 10.3 OS include a simple designed music player, a new keyboard layout that has a new black and red colour scheme.

Additionally, a 'Face down for power save' feature is also seen that will turn power saving on when the phone is placed face down on a flat surface. Also seen, is a 'Lift to wake device' feature, which will wake the smartphone up when it is picked up from a flat surface.

Other new features seen in alleged BlackBerry OS 10.3 screenshots include some improvements for the BlackBerry camera app, such as native panorama settings, a timer, and the ability to capture 720p video in 30fps and 60fps. The camera app also seems to be able to auto-suggest to the user when to use HDR for multiple exposures, based on conditions.