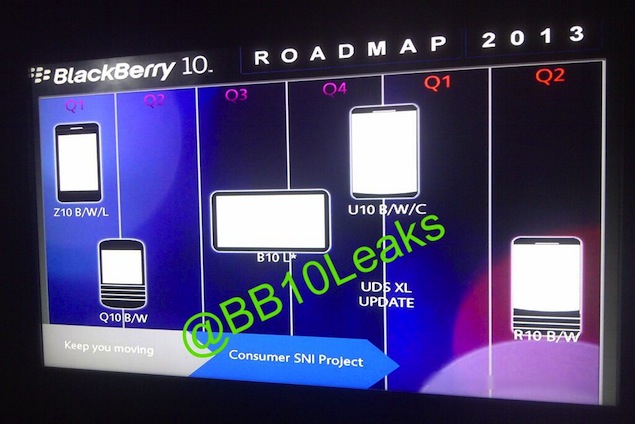 Photos of some slides from a presentation that purportedly talks about BlackBerry's product roadmap have appeared on Twitter, courtesy of @BB10Leaks. While it's difficult to verify the authenticity of the pictures, the slides display product names from BlackBerry's new BlackBerry 10 line-up and some 'upcoming' products along with their time-lines by quarter.

Update: Turns out it was an April fool's prank.

The picture of the slide shows the full touch Z10 and QWERTY keyboard device, Q10 in the first quarter. It also features a tablet with the name 'B10' which the company might introduce in Q3, and a large screen device, most probably a phablet, the U10, towards the end of Q4. It also indicates the presence of a large QWERTY device, the R10 which would debut in Q2 2014.

It's interesting to note that a recent report had indicated that US carrier Sprint which had chosen to skip the BlackBerry Z10, would launch a full touch device that would be the successor to the Z10 in the second half of the year. That device might turn out to be the U10. However, the company's executives including CEO Thorsten Heins, have said time and again that it's not focusing on tablets. So we're not sure if the next device after the Q10 would be a tablet.

Last year, there was another rumour that BlackBerry would release six BlackBerry 10 devices.

It would be interesting to see BlackBerry's product strategy with BlackBerry 10, specially at a time when large screen phones or phablets and tablets are gaining popularity among consumers.  Also, the first two devices in the range are premium ones, so the company surely needs a more diverse line-up of products in terms of price points, if it wants to succeed.
Comments