Black Shark 3 Gaming Smartphone to Launch on March 3: All You Need to Know

The gaming smartphone may be launched as Tencent Black Shark 3. 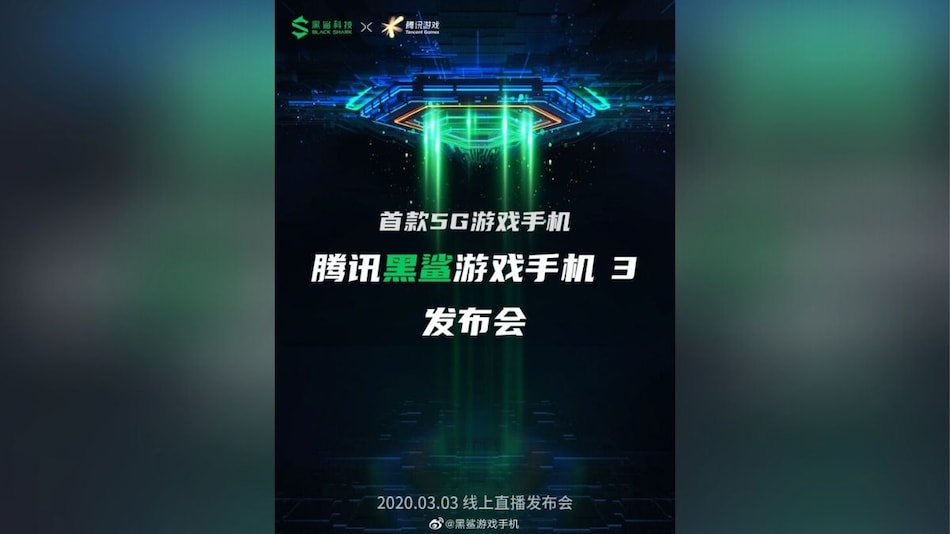 Chinese smartphone maker Black Shark is returning with its next gen gaming phone and will officially launch, the Black Shark 3, at an event in China on March 3. The latest gaming flagship seems to be called Tencent Black Shark 3, after the company announced a strategic partnership with Tencent Games that is popular for creating games like PUBG Mobile. It is still unknown when the phone will be launched in India and how much it will cost.

This will be company's first gaming phone that will support 5G, the teaser has revealed. Apart from 5G support, none of the phone's features are confirmed. However, thanks to leaks as well as a sighting on a certification website, we do have some idea of what to expect from the smartphone.

Last week, the 3C certification of the Black Shark 3 phone was spotted online, and a screenshot of it was shared on Slashleaks. The screenshot suggested that the phone will come with model numbers Shark MBU-A0 and Shark KLE-A0. The 3C listing also indicated that the phone will come with 65W fast charging support. This is in line with what Black Shark CEO Luo Yuzhou was teasing on Weibo recently.

Other than this, Tencent Black Shark 3 will reportedly come with a 120Hz refresh rate and users will have the option to switch between 60Hz and 90Hz. The phone is also expected to be powered by the latest Snapdragon 865 SoC and will run on Android 10 operating system. Overall, other major specifications such as cameras, RAM and body of the phone remain in the dark.

Black Shark entered Indian mobile market in March 2019 with its Black Shark 2 that comes in two variants and costed Rs. 29,999 and Rs. 39,999, respectively. Other than the difference in RAM and memory capacity of the two variants, the Xiaomi-backed gaming phone came with a similar 6.39-inch display and had 20-megapixel front camera and 48-megapixel + 12-megapixel dual rear camera.