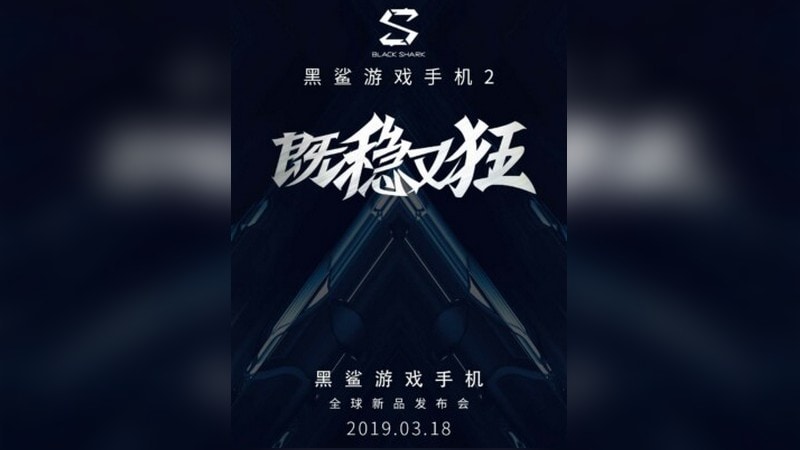 Xiaomi-backed Black Shark recently teased that the company's next gaming smartphone - the Black Shark 2 – will feature an advanced thermal management system dubbed Liquid Cool 3.0 technology. The company has now officially revealed the Black Shark 2's launch date. As per a poster shared on Weibo, the Black Shark 2 will be launched on March 18 in China. Moreover, the smartphone has now been spotted on AnTuTu, packing the flagship Snapdragon 855 SoC and Android 9 Pie operating system.

The teaser poster shared by the company mentions the name “Black Shark 2” at the top and the March 18 launch date beneath it. There has been no official revelation from the company regarding the Black Shark 2's hardware specifications or features, except the fact that it will come with the Liquid Cool 3.0 technology for heat management.

The Black Shark 2, which has been making rounds of the rumour mill under the name “Black Shark Skywalker”, has now been spotted on AnTuTu under the same moniker. The Black Shark 2 allegedly posted an impressive score of 359,973 points. The visit to the benchmarking platform also revealed some of its key specifications, such as the Snapdragon 855 SoC ticking at its heart, paired with the Adreno 640 GPU, 8GB of RAM, and 128GB of internal storage. On the software side, the Black Shark 2 was spotted running Android 9 Pie.

The Black Shark was also recently spotted on Geekbench packing 12GB of RAM and drawing power from the Snapdragon 855 SoC. Reports making rounds of the rumour mill indicate that the Black Shark 2 will come in two variants packing 8GB and 12GB of RAM.