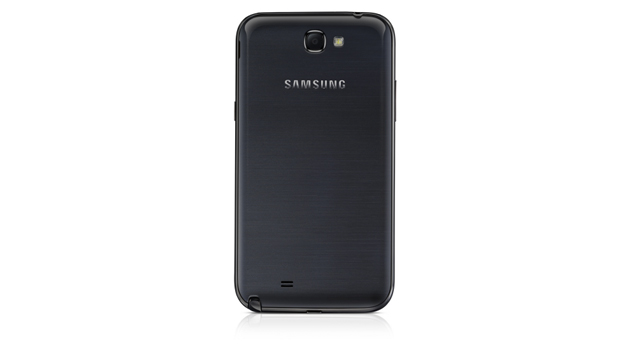 Bored of the Grey and White shades of the Samsung Galaxy Note II? Here's something to look forward to in case you're considering purchasing a Galaxy Note II in the near future.

An image leaked on Swiss site AndroidSlash shows the back side of the phablet from Samsung in Black. Apart from the leaked press render, there is no mention of the device's availability in this colour variant.

It isn't surprising to see the Black Note II, the reason being that reports by Sam Mobile in November were indicative of the Note II being released in three more colours namely Amber Brown, Topaz Blue and Ruby Wine, expected to ship next year. Further, the Samsung Galaxy S III mini is also likely to be released in Titan Gray, Garnet Red and Onyx Black.

With CES not far away, it is likely that the Korean manufacturer may unveil the new colours of the devices at the event in Las Vegas.

Earlier this month, the same blog also reported of a cheaper, more affordable variant of the Galaxy Note II in the works. Though the name has not been confirmed yet,  the reports suggest that this version of the device will not have the popular S-Pen and may also not sport the sAMOLED display.

The Galaxy Note II was introduced at IFA 2012. In November, Samsung announced sales of this phablet had topped 3 million units in the first 5 weeks, which means the company has sold another 2 million units in the last three-and-a-half weeks. By the end of the month, the Korean manufacturer reported that the sales of its device have topped 5 million barely two months since the phablet started shipping.

A specs reminder, the Galaxy Note II features an 8-megapixel rear camera and a 1.9-megapixel front camera. Like its predecessor, the phablet comes with the S-Pen stylus for taking notes on the device. In terms of connectivity, Samsung Galaxy Note II offers 4G, 3G, 2G, Wi-Fi, NFC, USB 2.0 and Bluetooth 4.0. It was launched in India in September and is presently available for Rs. 37,990 from Samsung India's online store.