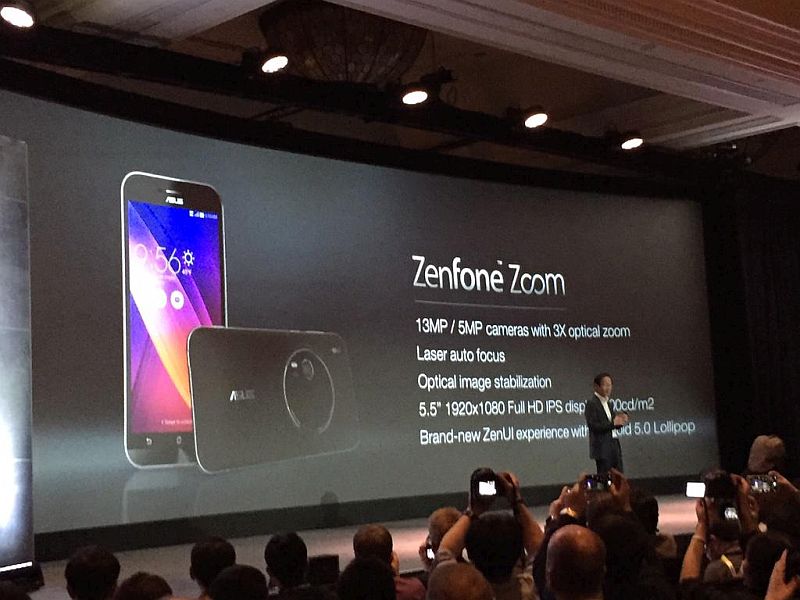 Asus CEO Jerry Shen has revealed that the company will be launching the ZenFone Zoom and ZenFone Max at the upcoming IFA trade show in Berlin next month. The Taiwanese company had teased its IFA announcement on September 2 last week, tipping the launch of a new ZenFone smartphone, a new smartwatch, and a new monitor in the teaser video.

It's worth noting that both the smartphones have been already revealed by Asus. While the Asus ZenFone Zoom was announced alongside the ZenFone 2 at CES this year, the ZenFone Max was revealed at the company's India launch earlier this month.

The Asus ZenFone Zoom was then announced to be available in Q2 2015 in Glacier White and Meteorite Black colours, and was priced at $399 (Rs. 25,300 approximately) before taxes.

The highlight of the Asus ZenFone Max, on the other hand, is its 5000mAh battery, and the smartphone can also work as a power bank. The smartphone also sports a 5.5-inch HD (720x1280 pixel) IPS display, a Snapdragon 410 processor, 2GB of RAM, 8GB or 16GB of inbuilt storage (expandable up to 64GB), a 13-megapixel rear camera with laser autofocus, and a 5-megapixel front camera. The company as of now has not revealed any estimated pricing for the Max smartphone.

He also claimed that the company is considering incorporating the PadFone series into the ZenFone Deluxe line. The Taiwanese company is targeting to ship over 21 million smartphones this year, and has plans to increase the number to 30-40 million units in 2016.

To recall, the Asus ZenFone Zoom was touted by the company to be designed with the photographer in mind and supports 3x optical zoom. Running on the latest Asus ZenUI based on Android 5.0 Lollipop, it comes with almost similar specifications as the ZenFone 2 except that the ZenFone Zoom sports a 13-megapixel rear camera with f/2.7 to 4.8-aperture, 10-element lenses with 3X optical zoom, OIS (optical image stabilisation), laser auto-focus and dual-colour Real Tone flash.