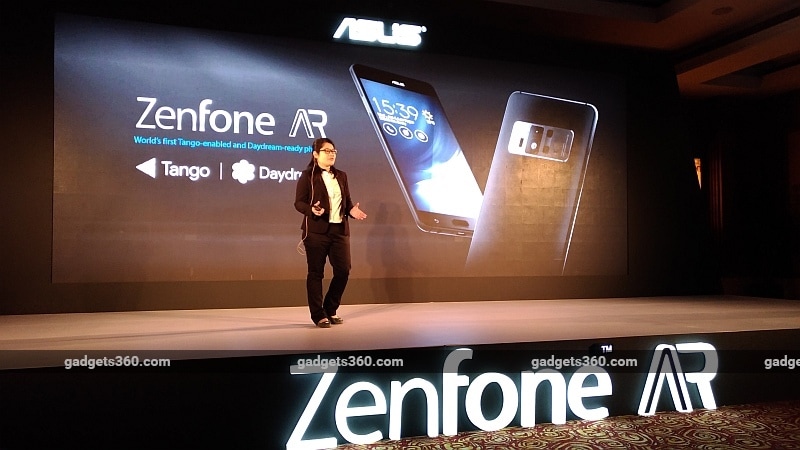 The Asus ZenFone AR, the  first smartphone in the world with Google Daydream and Tango support, has been launched in India at Rs. 49,999. Along with this, the ZenFone AR has 8GB of RAM. Available exclusively on Flipkart, the smartphone goes on sale Thursday itself at 4pm IST. To recall, the handset was first unveiled in CES 2017, and has a set of sensors and cameras, the ZenFone AR lets users navigate the world of augmented reality with Tango AR apps.

As we mentioned, the Asus ZenFone AR also supports the Daydream platform, with access to Daydream-supported apps. Apart from the RAM and the AR/ VR support, Taiwanese consumer electronics giant Asus is also touting the camera system on the ZenFone AR, which sports a 23-megapixel rear sensor with dual-PDAF, laser autofocus, OIS, and EIS, apart from motion tracking depth and sensing cameras, as well as an infrared (IR) rangefinder. The ZenFone AR also sports a "premium-crafted metallic diamond-cut" body, and bears a fingerprint sensor on the home button.

As mentioned above, the Asus ZenFone AR price in India is Rs. 49,999, and the smartphone will go on sale in the country from 4pm IST on Flipkart. It will only be available in a Black colour variant in India. The company has brought the 8GB of RAM/ 128GB inbuilt storage variant to India, though it had unveiled a 6GB RAM option apart from inbuilt storage ranging from 32GB up to 256GB at launch. In the box, users get the Asus ZenEar S earphones that support DTS Headphone:X and Hi-Res Audio. The ZenEar S are built out of aerospace metal, and have a triple diaphragm.

Flipkart has already listed some Asus ZenFone AR launch offers, including a Rs. 2,500 discount on the Google Daydream View VR headset (priced at Rs. 6,499). Reliance Jio has also teamed up with Asus and Flipkart to offer subscribers up to 100GB additional data and a complimentary Prime subscription. The data can be availed in the form of an additional 10GB data voucher per recharge of Rs. 309 and above, for up to 10 recharges until March 2018.

The dual-SIM (Nano) Asus ZenFone AR runs ZenUI 3.0 based on Android 7.0 Nougat. It sports a 5.7-inch QHD (1440x2560 pixels) Super AMOLED display with Corning Gorilla Glass 4 protection and claims of over 100 percent support for NTSC colour gamut. The smartphone is powered by a Qualcomm Snapdragon 821 SoC (two cores clocked at 2.34GHz and two core clocked at 1.6GHz) that's been optimised for Google Tango and Daydream VR performance, and is coupled with 8GB of LPDDR4 RAM.