Asus ZenFone 6’s rotating camera movement can be controlled by the user. 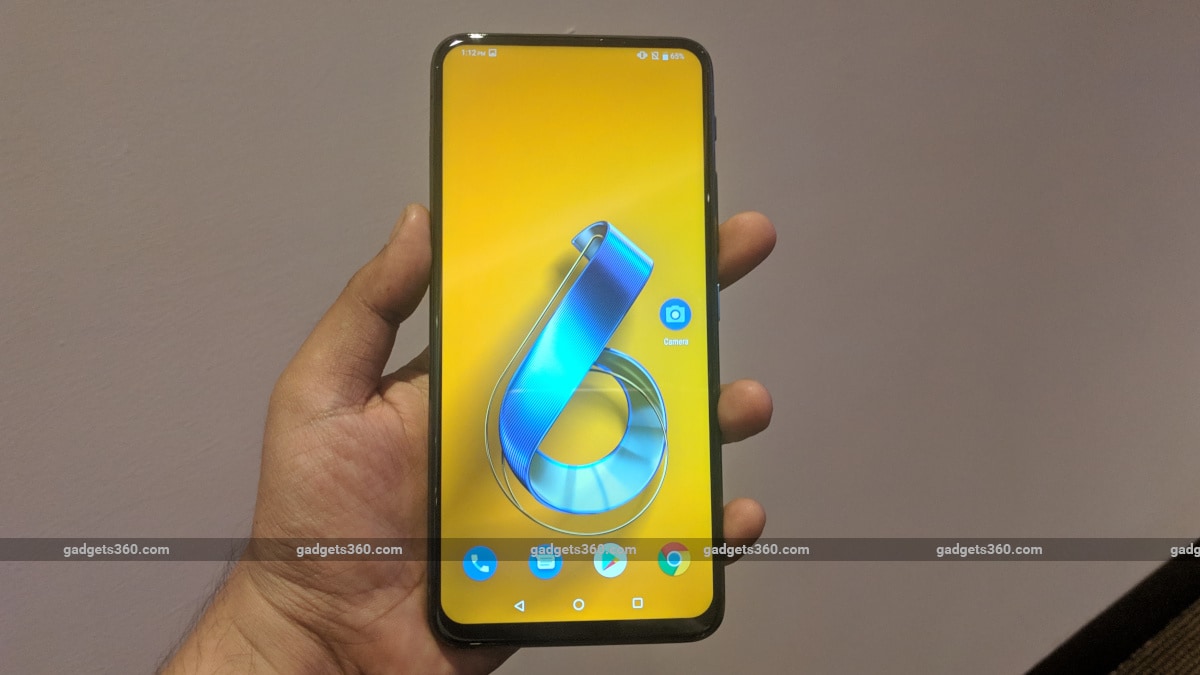 Asus ZenFone 6 is official. The Taiwanese computing giant on Thursday unveiled the new ZenFone 6 smartphone at a press event in Spain. Set to be a successor to the company's last year's flagship ZenFone 5Z, the Asus ZenFone 6 is the company's first smartphone with a rotating 'flip' camera. In an effort to reduce bezels and provide an all-screen front, the company has opted for a flipping camera. There is a dual camera setup in the phone, which normally resides on the back, but rotates when needed to become a selfie shooter. Asus seems to be following in the footsteps of Samsung, which had also launched a rotating camera smartphone in the form of Galaxy A80 last month. The smartphone thanks to its affordable pricing is set to compete with the OnePlus 7 and OnePlus 7 Pro, rather than more premium flagships from Samsung and Apple.

Unlike Samsung's rotating camera implementation in Galaxy A80, which also required the camera to rise from its base position, Asus' implementation is relatively simple. The motorised dual-camera setup present on the back of the Asus ZenFone 6 simply rotates vertically to face the user of the phone. Interestingly, Asus is also allowing the ZenFone 6 users to control the amount of rotation, so the users can stop the rotation midway to take photos at interesting angles. The company has also added fall-protection for the camera module, which will automatically retract the camera to its base position if the phone detects sudden movement - similar to how the OnePlus 7 Pro's pop-camera retracts.

Asus ZenFone 6 sports a full-screen front covered with Corning Gorilla Glass 6 and back featuring a 3D-curved glass. It isn't a particularly attractive smartphone and looks like a giant slab of metal and glass.

The dual-SIM (Nano) Asus ZenFone 6 runs on Android Pie with the company's Zen UI 6 on top, with a promise to upgrade to Android Q and Android R. The company has also joined the Android Beta programme. The phone features a 6.4-inch full-HD+ (1080x2340 pixels) IPS screen with 19.5:9 aspect ratio, 92 percent screen-to-body ratio, 600 nits peak brightness, and 100 DCI-P3 colour gamut. The ZenFone 6 is powered by octa-core Qualcomm Snapdragon 855 SoC, paired with up to 8GB of RAM and Adreno 640 GPU.

On the imaging front, as we mentioned earlier, the phone packs a dual camera setup, which houses a 48-megapixel primary shooter with f/1.79, laser focus, and dual-LED flash as well as a 13-megapixel secondary ultra-wide-angle camera.

Asus ZenFone 6 comes with a fingerprint sensor on the back

Asus has included a massive 5,000mAh battery with support for Quick Charge 4.0. There are dual speakers onboard as well with dual smart amplifiers and 3.5mm audio jack. The phone packs up to 256GB of inbuilt storage (UFS 2.1), which can be expanded using a dedicated microSD card slot (up to 2TB).

Other specifications of the ZenFone 6 include USB Type-C, NFC, Wi-Fi 802.11ac (Wi-Fi 5), Bluetooth 5.0, and GPS connectivity options. The dimensions of the new Asus phone are 159.1x75.11x8.1-9.1mm and it weighs 190 grams. The company is also touting the presence of stereo speakers (top and bottom), and a notification LED light.