Asus ROG Phone 5 starts to show major cracking in the first bend itself. 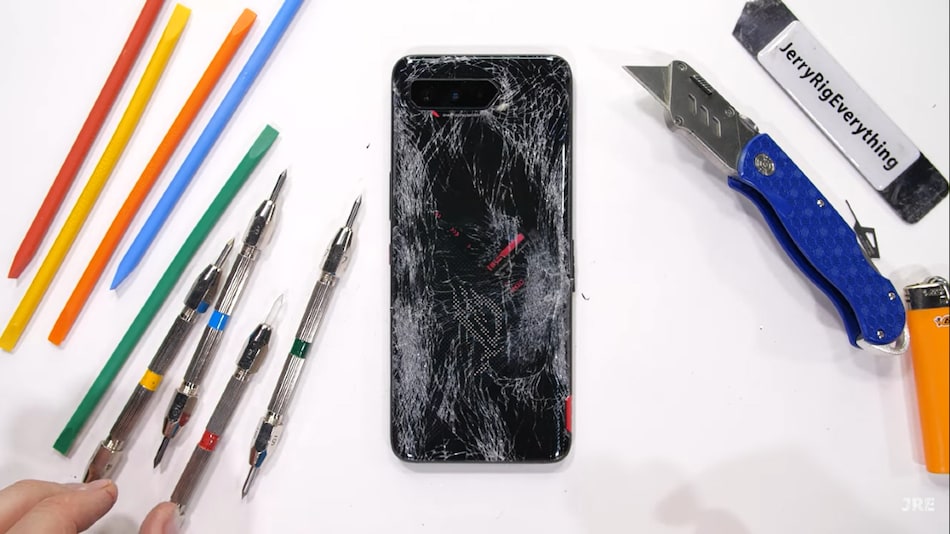 Asus ROG Phone 5 failed JerryRigEverything's popular durability test miserably in a video on YouTube. For the Rs. 50,000 starting price Asus asks for the phone, the ROG Phone 5 scratches at number 6 on Mohs scale and shatters and breaks when applied pressure with the hand. While the packaging is extremely fancy, the phone is revealed to be not as sturdy as one would expect it to be. The ROG Phone 5's easy bendability puts questions on whether it's safe to put in the pocket, and buyers are advised to take extreme care while handling the phone.

JerryRigEverything's Zack Nelson has published the durability test of the Asus ROG Phone 5 on his YouTube channel. The phone is bundled with a detachable fan for intense gaming sessions and in its scratch test, it starts to show marks at level 6. Furthermore, there are rubber stoppers put in place for the charging port which, Nelson says, may not last for more than a week. The sides scratch easily as they are made of metal and the SIM tray also lacks rubber lining for basic water protection.

The fingerprint scanner also refuses to work after the scratch test and Nelson wasn't able to register his thumb after multiple attempts. The Asus ROG Phone 5 did survive the flame test with the pixels turning white after 30 seconds but recovering soon after.