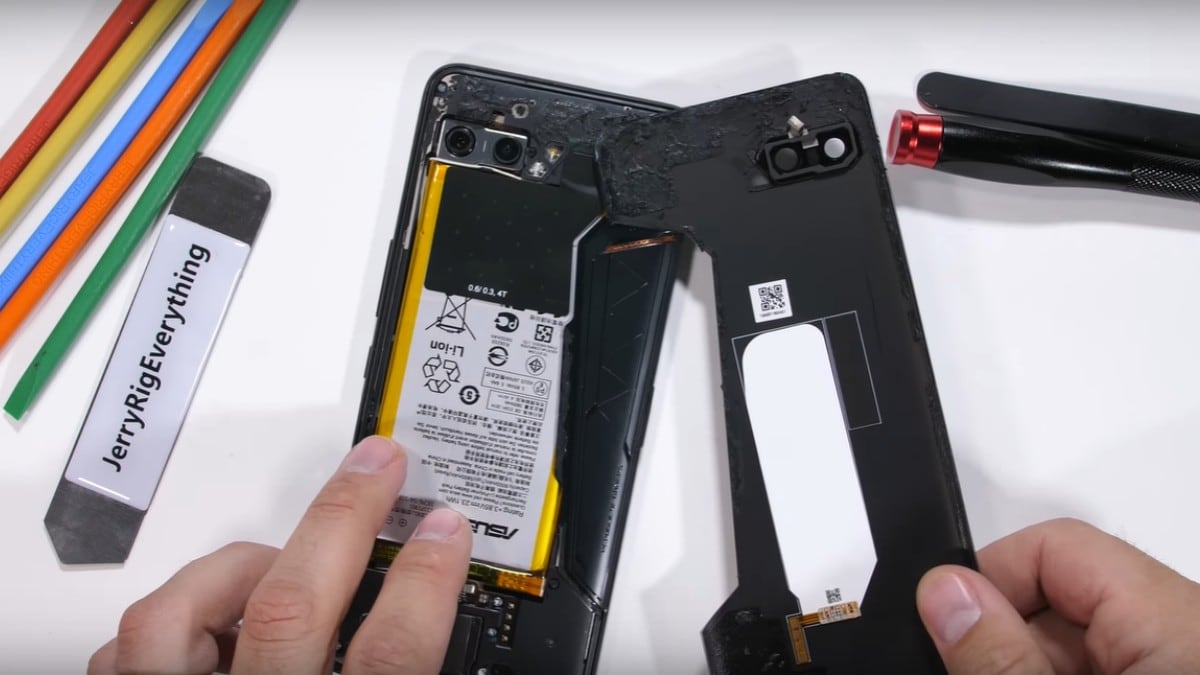 Asus ROG Phone 2 is a beast of a phone targeted at mobile gaming enthusiasts and tries to justify its appeal with top-of-the-line hardware and some extra tweaks such as a 3D vapour chamber and external cooling vent for better heat dissipation. But it appears the metal vent on the ROG Phone 2's rear panel is more of an aesthetic element than an actual component for active thermal management. The revelation was made in a recent teardown of the Asus ROG Phone 2 by Zack of the JerryRigEverything fame.

In the teardown video, one can see that the glass portion of the phone's rear panel is separated by a plastic strip on the right side that also hosts the air vent with copper accents. From the outside, it appears that the air vent and the plastic strip on the Asus ROG Phone 2 are integral components of the phone's cooling system, but that does not appear to be the case here. The entire metal vent, which is actually a black plastic strip, has a thin metal plate attached to it that is obscured from view by a thin film over it.

However, the plastic strip is not in direct contact with the motherboard itself, which means it facilitates passive thermal cooling at best by using the air vent as an exit channel for hot air emanating from the internals. As for the actual cooling, there is a huge copper plate in the Asus ROG Phone 2 that acts as a heat sink. However, it was interesting to see that cutting through the copper-lined vapour chamber did not reveal any vapour inside it, contrary to Asus claiming that the ROG Phone 2 employs a vapour chamber cooling system.

Inside the Asus ROG Phone 2, the copper plate is placed between the phone's frame and its AMOLED panel, taking advantage of the thin panel for dissipating some heat. But this design also has its drawback, as the copper heat sink cannot be separated until the fragile AMOLED panel is removed from the frame, an act that poses the risk of shattering it.