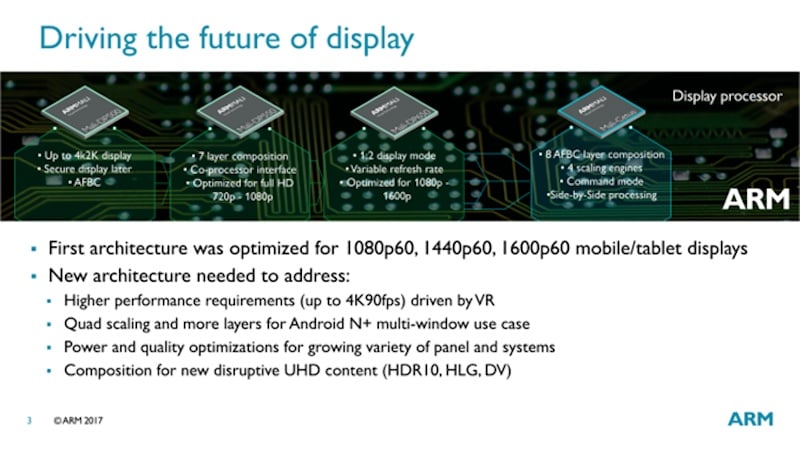 ARM Holdings, which is known for its ARM processor designs for mobile devices, has announced a new version of its Mali display unit. The next-generation Mali display processor is codenamed Mali-Cetus and has been designed to optimise Android's latest Nougat operating system. Alongside, the company unveiled a brand new display processor architecture.

The Mali-Cetus is based on a new architecture and works with the GPU to improve overall efficiency and support Android Nougat's multi-tasking functions. ARM also touts the Mali-Cetus to work with up to 4Kx2K screens at up to 120Hz. This is done by splitting up 4K video layers to sub-units, which also improves battery efficiency.

The new architecture looks to support features like HDR output and high throughput modes for VR. One of the biggest highlights is the multi-tasking support for Android Nougat. The new composition unit can composite 8 UI layers when driving a single display and it can scale 4 layers per display output for dual display.

The new processor also features a "co-processor interface," allowing OEMs to expand Mali graphics with their own hardware, notes AnandTech. Big feature editions enabled by Cetus can be broken down. And example of this is ARM's Assertive Display block which uses the interface to provide HDR support.

ARM recently also announced its first image signal processor - the ARM Mali-C71, which is targeted at the automotive industry. The company is yet to announce when the Mali-Cetus will make its way to Android devices, but we could see it happen later this year.