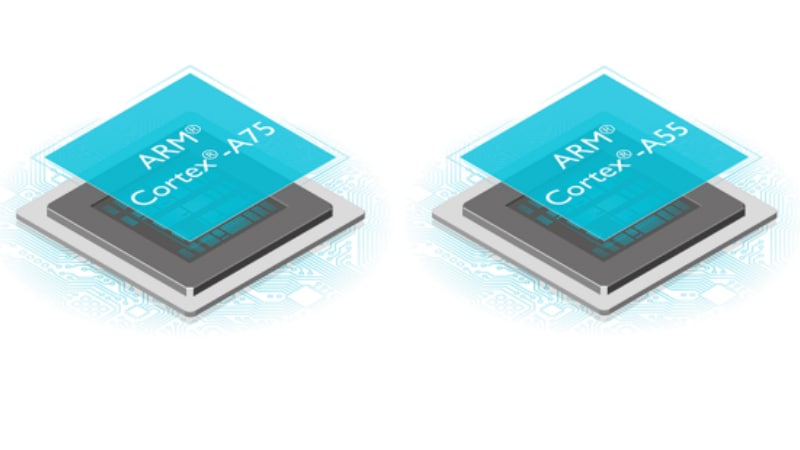 On the eve of Computex, ARM has unveiled a new generation of mobile CPUs and GPUs at an event in Taipei. This includes the ARM Cortex-A75 meant for flagship level devices, and the ARM Cortex-A55 claiming to be the ‘most versatile high efficiency processor’ catering to the mid-range smartphone segment. There’s a brand new and ‘more efficient’ Mali-G72 GPU launched alongside as well.

The biggest highlight this year is ARM’s new Dynamiq technology embedded into both the CPUs. This technology allows for greater flexibility of cores, allowing companies like Qualcomm to mix and match up to eight cores in a single cluster enabling them to tweak performance, design, and energy, and overall more customisation. Cores can be tweaked into pairs of 4 plus 4, 2 plus 6, 1 plus 7, 1 plus 3, and many more. So for example, makers can embed seven Cortex-A55 cores and one Cortex-A75 cores in one single cluster to tweak battery performance and save on cost.

ARM claims to be on a trajectory to deliver 50x AI performance increase in the next 3 to 5 years. The company claims that the ARM Cortex-A75 is 22 percent better than the predecessor Cortex-A73. Both the ARM Cortex-A75 and Cortex-A55 are built on latest ARMv8.2-A architecture. The CPUs are designed to specifically handle challenges of artificial intelligence and machine learning, both a rising trend seen among smartphones. On the software side, the CPUs can take advantage of the ARM Compute Library that boosts AI and ML performance by 10x to 15x.

The Cortex-A75 claims to offer 16 percent more memory throughput than its predecessor as well. It can deal with 2W of power consumption offering up to 30 percent of extra performance on large screen devices. The Cortex-A55 claims to offer 2x more memory efficiency than Cortex-A53, 15 percent more power efficiency, and 10x more scalability than its predecessor.

At the event, ARM also launched the Mali-G72 GPU which is built on the new Bifrost architecture to provide better performance in a smaller area and on a budget. There’s an expected 1.4x rise in in-device performance compared to the Mali-G71 GPU. It brings 25 percent higher energy efficiency, and 20 percent better are efficiency as well. There’s also 17 percent better machine learning efficiency as well. ARM claims that the new GPU is designed for the new and demanding use cases of ML, High Fidelity mobile gaming, and mobile VR. It claims to bring 40 percent more performance on premium mobile devices. ARM claims that all these latest designs will be seen on mobile devices in the first quarter of 2018.