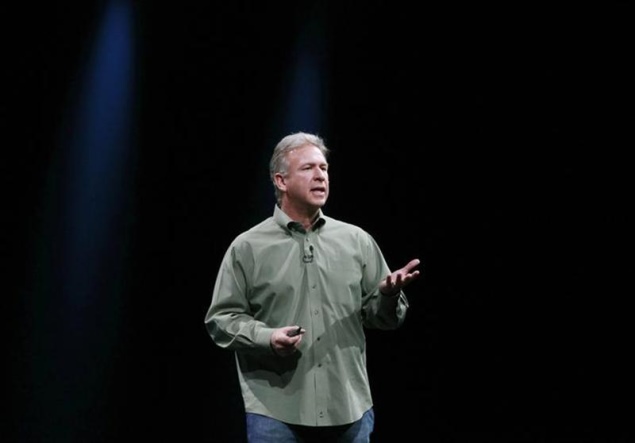 A top Apple Inc executive testified on Friday that Samsung Electronics Co Ltd undermined his company's marketing efforts, reputation and business by selling devices that copied the iPhone and iPad.

Apple marketing chief Phil Schiller appeared as a witness during a damages retrial between the two companies in a San Jose, California, federal court. Schiller also denied that Apple launched the iPad mini as a response to competition in the tablet market, saying Apple was merely trying to make a better product.

"It's much harder to create demand and people question our innovation and design skills like people never used to," Schiller said, adding that Samsung "weakened the world view of Apple as this great designer and innovator."

Apple and Samsung are engaged in global litigation over each other's patents. Last year, Apple was awarded over $1 billion after it convinced a jury that Samsung copied iPhone features, such as using fingers to pinch and zoom on the screen, along with design touches such as the phone's flat, black glass screen.

However, in  March U.S. District Judge Lucy Koh ordered a retrial on about $400 million in damages, ruling that the previous jury made some errors in its calculations. Samsung manufactures phones that use the Android operating system, which is developed by Google Inc.

Apple argued Samsung should pay $379.8 million for violating five patents on the iPhone, including about $114 million in lost profits. Part of Apple's argument to recover lost profits is that Samsung customers would have bought the U.S. company's iPhones had Samsung phones not incorporated Apple's patented features.

However, Koh ruled on Friday that Apple had not presented sufficient evidence to recover lost profits on four out of the five patents in the retrial. That could pare back how much lost profits the jury ultimately awards to Apple.

An Apple representative declined to comment on Koh's ruling. Samsung says it should only have to pay a total of $52.7 million.

Schiller has led Apple's marketing efforts since the iPhone was launched in 2007. He touted the pioneering design and "ease-of-use" of Apple's products before the six-woman, two-man jury.

Samsung copied "many attributes of Apple's products; its designs and features the very essence of what Apple is about," Schiller told the jury on Friday. "If we don't have that, we don't have Apple's business."

Under cross-examination, Samsung attorney William Price tried to push Schiller to concede that Apple was not the first to create an attractive and easy-to-use phone.

"Apple doesn't own a patent on a product being beautiful or sexy, isn't that correct?" Price asked.

"The industry does tend to follow trends of products that are doing well," Schiller said.

Price also tried to get Schiller to admit that Apple followed Samsung's lead in introducing smaller tablets by offering its iPad mini. But Schiller said the introduction of the mini "had nothing to do with competition."

"We were simply trying to make our product better," Schiller added.

Schiller was the last of Apple's six witnesses. Samsung is expected to begin presenting witnesses on Friday, and Koh has set closing arguments for Tuesday.

The case is Apple Inc v. Samsung Electronics Co Ltd, U.S. District Court for the Northern District of California, No. 11-1846.