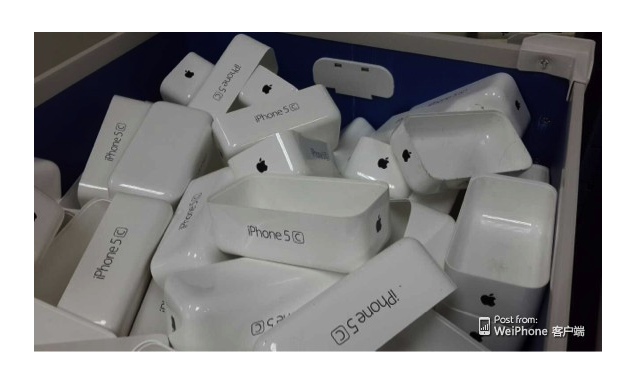 While rumours are rife about Apple launching a new low cost variant of the iPhone, it's still not known what the purported phone will be called.

However, a new leaked photograph of plastic retail packaging that appeared on a Chinese website shows white plastic boxes marked 'iPhone 5C' complete with the Apple logo. It's hard to confirm if the packaging boxes are genuine, or whether they're being made for Apple's upcoming low-cost iPhone.

If we assume that these boxes are genuine, then it's likely that Apple would use them for it's budget iPhone which is rumoured to come in a number of colour options. The leaked picture was posted on Chines website WeiPhone and was first spotted by Nowhereelse.fr.

While the next generation iPhone is likely to be called the iPhone 5S, inline with Apple's nomenclature pattern for the iPhone, the 'C' in iPhone 5C could denote 'colour/ color'.

Another interesting thing to note here is that the plastic boxes seen in the leaked images appear to have a lining inside where a front cover, which would most likely be transparent, can fit. So the packaging would be pretty similar to the iPod touch's packaging to highlight the new iPhone's coloured trims.

The budget iPhone has made several appearances in pictures and videos. The leaks hint at colourful back panels made of polycarbonate/ plastic and a 4.0-inch screen.

A video of the phone appeared on the blog of Techdy, showing the  plastic polycarbonate body back panel of the alleged low-cost iPhone that appeared in recent leaks.

French website Nowhereelse.fr had earlier shared a couple of pictures that originally appeared on a Chinese website depicting Red, Yellow and Green plastic shell cases of what looks like the back of a new variant of iPhone.

Another picture of the rear shell appeared in April, and was shared by case manufacturer Tactus. The case maker had said that the cheaper iPhone would be available in Black, White, Blue, Red and Yellow colours, citing the 'factory producing this secretive project' as a source. Tactus had informed that the actual phone might be around 9mm thick, 120mm in height and around 62-65mm in width, making it both taller and wider than the iPhone 4 and 4S.

Facebook to make capital investments worth $1.6 billion in 2013
Karbonn Smart A1 Star and A5 Star budget smartphones now available online