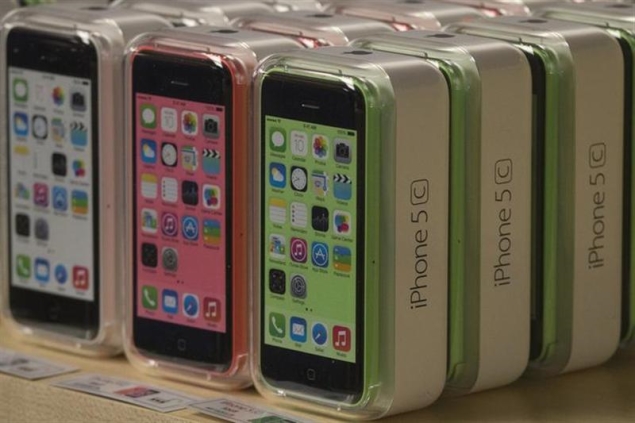 Apple Inc's iPhone sales and revenue forecasts, due to be released on Monday, may offer clues as to whether its low-cost iPhone 5c model missed the mark or whether the world's largest tech company can continue its run of smash-hit gadgets.

Signs have emerged that demand for the cheaper model is lagging the top-tier iPhone 5s - both of which went on sale in September - because its $100 discount is proving to be insufficient to motivate emerging market and price-conscious customers.

But some analysts say the concerns are overblown and that a greater proportion of iPhone 5s shipped, translates into better margins and earnings overall.

Apple will be reporting results just a week after taking the wraps off an incrementally improved iPad Air. But it is the iPhone, which accounts for more than half the company's profit and is its highest-margin gadget, that takes center stage.

Apple is expected to report sales of 33 million to 36 million iPhones in its fiscal fourth quarter that ended in September, rising to more than 50 million in the typically strong holiday quarter - the first full quarter of sales of the two new phones.

"Media reports of 5c production cuts are misleading, in our view, given what we think has been strengthening overall 5s/5c production with 5s vectors continuing to strengthen even real time," Timothy Arcuri, an analyst at Cowen & Co, said in a research note.

Apple has come under pressure over the past year or two to bolster sales of its iPhones and iPads as perennial rival Samsung Electronics and cheaper gadgets based on Google Inc's Android software chip away at its once-leading market share.

Its stock has gained 12.5 percent since August, when famously aggressive activist investor Carl Icahn disclosed a large position in the iPhone maker and began making calls for a new, stepped-up $150 billion share buyback program - boosting hopes of a bigger return of cash to shareholders than anticipated.

But the stock is still down about 1 percent this year, vastly underperforming the S&P 500's 23 percent gain.

Longer-term, investors wonder whether the company that revolutionized the cellphone industry and popularized the tablet computer has another groundbreaking device left in it.

Analysts say it will take a genuinely new device - like the oft-rumored smartwatch or some sort of TV - to revive the stock. Investors also hope that Apple will seal a deal to sell phones through China Mobile Ltd, gaining access finally to the country's largest telecoms operator.

"We do see fewer positive catalysts for the stock as the company finishes its annual product line refresh," Colin Gillis, an analyst at BGC Financial, said in a Friday note to clients.

Realism
Apple is expected to have moved 15 million iPads in the September quarter, which would be an increase of 1 million over the year-ago quarter.

A month ago, on the back of strong initial sales of its new iPhones, Apple polished its fiscal fourth-quarter financial forecast, saying it expected revenue toward the high end of its previous forecast for $34 billion to $37 billion.

Investors will also look at Apple's December quarter forecasts - once ludicrously conservative but now a better indication of management's expectations - for an idea of the company's holiday-quarter hopes.

Apple is cutting production orders for the plastic-backed, multi-hued model just a month after launch, a source familiar with its supply chain said a week ago, fueling speculation its discount to the 5s may not be enough to drive demand during the crucial shopping season.

Pegatron Corp, which assembles the model, had seen orders reduced by less than 20 percent, said the source, who asked not to be identified because the information is sensitive. Hon Hai Precision Industry Co another major assembly contractor for the 5c, had its orders for the same period reduced by a third, the Wall Street Journal reported.

Beyond holiday projections, analysts want evidence on Monday that profit margins can be sustained as the competition intensifies, and evidence of its ability to innovate.

Wall Street is expecting fiscal fourth-quarter revenue of $36.8 billion, up from $36 billion a year ago, and earnings per share of $7.93, down from $8.67 a year ago, as profit margins come under pressure.