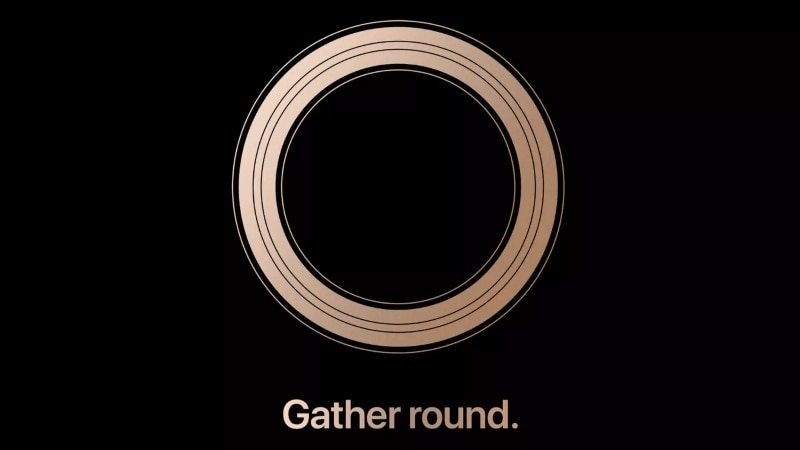 Apple has sent out media invites for a special event at the Steve Jobs Theater at its Apple Park campus in Cupertino, California on September 12. Unlike Apple's invitations which are usually themed around the products that people expect to be announced, this one features just a gold ring evoking the design of the main building at Apple Park, against a stark black background. While Apple obviously hasn't shared any details about what will be revealed at the event, one can expect the Cupertino-based company to showcase the 2018 iPhone lineup in all its glory.

Rumours indicate that Apple will launch three new iPhone models at the event: an iPhone X (Review) successor with a 5.8-inch OLED display, a larger variant 'iPhone X Plus' with a 6.5-inch OLED panel, and a third 6.1-inch iPhone with an LCD screen, which will be the most affordable model in the new lineup. All three models have been tipped to keep the iPhone X's notch and edge-to-edge display.

The new high-end iPhone has reportedly been dubbed D33 internally and is expected to ship with a 6.5-inch display, making it the largest iPhone to date. If true, that would make the new iPhone one of the biggest phones around, even bigger than the likes of the recently announced Samsung Galaxy Note 9 (Review). In terms of software, the biggest iPhone has been tipped to get the ability to view content side-by-side in apps like Mail and Calendar.

The 5.8-inch iPhone X successor - reportedly codenamed D32 - is tipped to be an incremental upgrade, with changes mainly in the processor and camera departments.

The most affordable iPhone in the 2018 lineup - rumoured to be codenamed N84 - will apparently look like the iPhone X but will be available in multiple colours. The phone is rumoured to sport a 6.1-inch screen, but use the more affordable LCD technology instead of OLED.

All three models are expected to feature Face ID and include the gesture-based navigation that Apple introduced when it removed the home button from last year's flagship phone. At least one of the new iPhone models is also tipped to support dual-SIM connectivity in select markets.