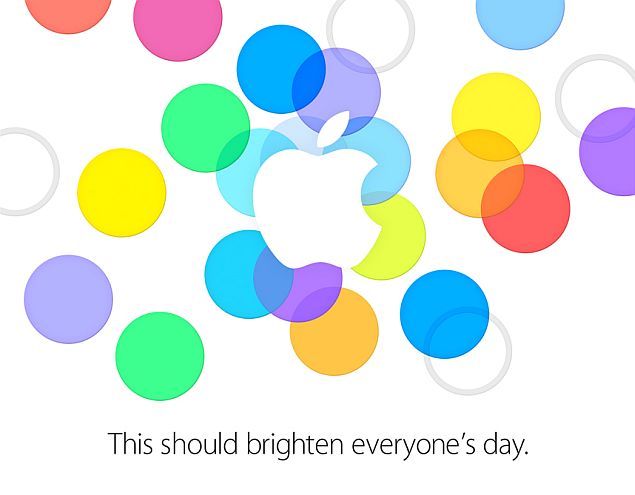 After a flurry of rumours, we now have official confirmation from Apple that it's hosting a special event on September 10 in San Francisco, where it's expected to announce two new iPhones and the final version of iOS 7, the next iteration of its mobile OS.

Apple has started sending invites for the special event according to a number of Apple-focused publications including Jim Dalrymple's The Loop. The event will be held at Apple's Cupertino headquarters and will start at 10am Pacific Time.

The picture accompanying the invite features a White Apple logo surrounded with circles in different colours, in line with the colourful new UI of iOS 7 and perhaps representing the colourful shells of the iPhone 5C, the alleged budget iPhone. The image is marked by a 'This should brighten everyone's day' message.

A number of rumours including some by credible publications and journalists such as AllThingsD and Jim Dalrymple, had confirmed September 10 as the most probable date for Apple hosting a special event to announce the next generation iPhone, iPhone 5S and the low cost iPhone, iPhone 5C.

The iPhone is usually made available to the public in major markets including US, Canada, France, Japan, Hong Kong, UK, and Singapore, around a week after the official announcement. Rumours have indicated that Apple will start selling the iPhone starting September 20.