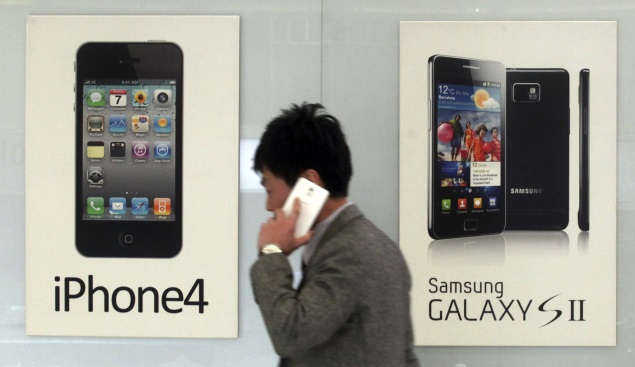 The high-stakes battle between the world's largest smartphone makers is scheduled to wrap up this week after a monthlong trial that has pulled the curtain back on just how very cutthroat the competition is between Apple and Samsung.

Closing arguments in the patent-infringement case are scheduled to begin Monday, with the two tech giants accusing each other, once again, of ripping off designs and features. At stake: $2 billion if Samsung loses, a few hundred million if Apple loses.

Teams of attorneys on both sides have spent the month trying to poke holes in obscure and bureaucratic patent legal claims, while keeping the eight jurors engaged. Drawing the most attention in the courtroom and the media are insider emails and meeting presentations documenting the frustration each company faced as they competed for market share.

Less than a year after Apple unveiled its iPhone in 2007 combining a web browser, music player and phone in one swipeable device, Samsung officials noted they were quickly losing customers.

"While Traditional OEMs are busy fighting each other in the Feature phone space Apple is busy making the category obsolete," said one confidential briefing presentation. "What makes the iphone unique is software (applications) and services, beautiful hardware is just a bonus"

"Consumers want what we don't have," said a 2013 Apple presentation a few years later, noting that the low-priced, easy-to-view competition was surging ahead.

Both have studied each other's marketing as well.

In 2009, Samsung designers examined step by step why iPhones were known to be easier to use than Samsung, finding their own offerings weren't friendly and lacked emotion and charm.

When Samsung aired a Super Bowl ad in 2013, Apple marketing head Phil Schiller had praise for the competition.

"It's pretty good and I can't help but think 'these guys are feeling it' (like an athlete who can't miss because they are in a zone) while we struggle to nail a compelling brief on iPhone," he wrote in an email. "That's sad because we have much better products."

Throughout the three years of litigation, Samsung's market share has grown. One of every three smartphones sold last year was a Samsung, now the market leader. Apple, with a typically higher price, was second, with about 15 percent of the global market.

Although it's impossible to predict what a jury will do, two years ago a federal jury found Samsung was infringing on Apple patents. Samsung was ordered to pay about $900 million, but it is has appealed the judgment and has been allowed to continue selling products using the technology.