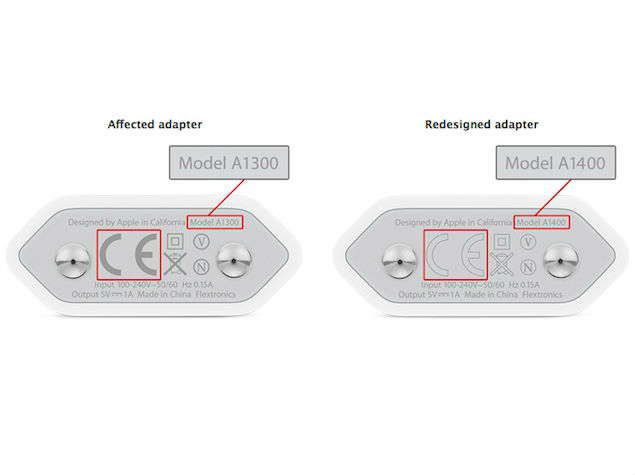 Apple on Friday released a statement regarding its 5W European iPhone USB adapters saying that they 'may pose a safety risk.' The statement on Apple's webpage reads, 'Apple has determined that, in rare cases, the Apple 5W European USB power adapter may overheat and pose a safety risk. This adapter came with iPhone 3GS, iPhone 4 and iPhone 4S models shipped from October 2009 to September 2012. It was also sold as a standalone accessory.'

Apple has listed a total of 36 countries where the adapter was sold, which includes India. The affected adapters bear the model number A1300. Apple will be replacing the affected models with the A1400 model. Another distinction mark on the new adapter will be the letters 'CE' outlined in light grey, as opposed to the solid dark grey 'CE' from the old adapters.

Users will need to bring the affected iPhone adapters to an authorised Apple Retail Store, or reseller. Users can also have their chargers replaced over the phone via Apple technical support. In addition, Apple also mentions that it will refund customers who had paid for replacement chargers because of the issue. Apple says, 'We will need to verify your iPhone serial number as part of the exchange process so please bring your iPhone with you. The affected power adapter will be disposed of in an environmentally friendly way.'

It is also important to note that last year in August, Apple had run a similar trade-in programme for third party chargers, which were not sanctioned by Apple. Users then had the option of trading in the counterfeit or third-party chargers for certified Apple models for the local equivalent of $10. Apple had then said in a blog post 'Recent reports have suggested that some counterfeit and third party adapters may not be designed properly and could result in safety issues.' The programme had run from August 16 to October 18.