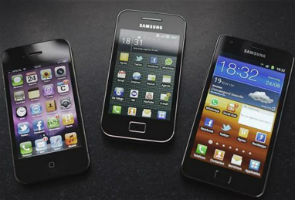 Apple Inc told jurors on Tuesday that Samsung's internal documents show it made a decision to copy the iPhone because the South Korean company could not compete in the smartphone market on its own.

However, Samsung Electronics Co Ltd contended that Apple could not claim a "monopoly" over the rectangular design with rounded corners, as it was invented before the iPhone.

Opening statements began on Tuesday in the high profile U.S. trial between Apple and Samsung. Both sides relied on slides featuring various phone models, internal emails and news reports to make their points.

The world's largest consumer electronics corporations have been waging legal war around the world, accusing each other of patent violations as they vie for supremacy in a fast-growing market for mobile devices.

Apple attorney Harold McElhinny started off by showing slides that featured old Samsung phones from 2006 and compared it to the Korean company's newer smartphones from 2010.

The key question, McElhinny said, would be how Samsung moved from the old phones to "these phones." And even though Apple is a successful company, he said, it must defend its rights when someone steals their property.

Samsung attorney Verhoeven countered that many iPhone features, like its popular minimalist design, had already been thought up by others before its release.

"There's a distinction between commercial success and inventing something," Verhoeven said.

Samsung showed slides featuring various mobile device designs prior to the iPhone that had rectangular form factors with rounded corners.

The Samsung products at issue run on the Android operating system, which is developed by Google Inc .

McElhinny showed jurors an internal Samsung product analysis which said the iPhone's hardware was "easy to copy." Another document prepared by a Samsung executive said the company was in a "crisis of design" due to the iPhone.

However, Verhoeven said Samsung's analyses were what all companies do in the smartphone industry, including Apple.

Before opening statements began on Tuesday, U.S. District Judge Lucy Koh dismissed one of the jurors, a woman who works as an insurance agent. The woman said her employer would not pay her salary during jury service.

The nine member jury is now made up of seven men and two women.