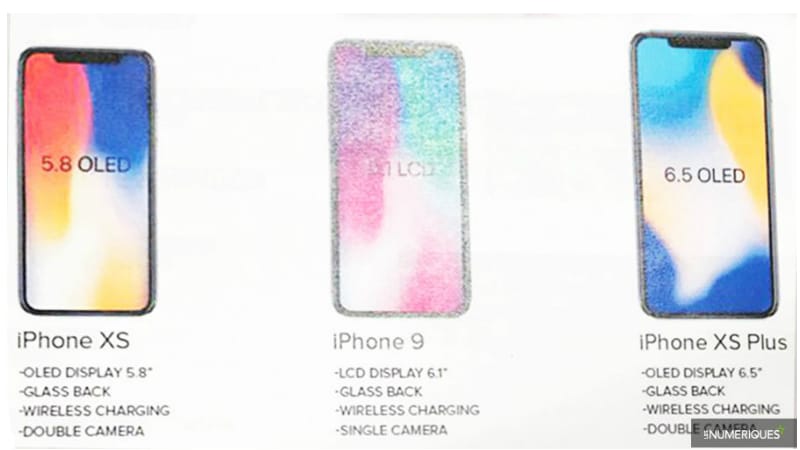 Apple is expected to launch three new iPhones this year - one iPhone X successor with an OLED display, one 6.5-inch most premium variant with OLED display, and another 6.1-inch LCD variant. Names of the three iPhones have been flying around and guess work has also been into play, but a fresh report looks to put all speculations to rest, and states that the three variants will be called iPhone XS, iPhone 9, and iPhone XS Plus respectively. Furthermore, hands-on videos of the three devices have also been leaked online giving us a clean look at the design of the three devices.

Starting with a report from Les Numeriques, it also states that Apple will launch three iPhones this year, citing a leaked image showing everything. It claims that the least expensive variant will just be called iPhone 9. It will sport an LCD display, a glass back, and a single camera setup at the back. The 5.8-inch iPhone XS will sport an OLED display, a glass back, and a dual camera setup. Lastly, the most premium 6.5-inch iPhone XS Plus will also sport an OLED display, a dual camera setup at the back, and support wireless charging as well.

Separately, MobileFun has posted a hands-on video of the iPhone 9 (or iPhone 2018), iPhone XS, and iPhone XS Plus. The video shows us the three phones from all angles, and the publisher says that the three devices are high-quality replicas of the actual ones expected in the fall. The video reiterates all that is known already and we can see that the display notch is on all three devices. The iPhone 9 has a single camera at the back, while the other two have a vertically stacked dual camera setup. All three sport glass backs, and the iPhone XS Plus is considerably larger than the other two.

EverythingApplePro has also published a hands-on video, and you can watch both of them below.

Google Buys Startup GraphicsFuzz to Integrate Its Graphics Testing in Android Ecosystem
Apple Music Begins Rolling Out Friends Mix, a Playlist With Songs Your Friends Have Been Listening To