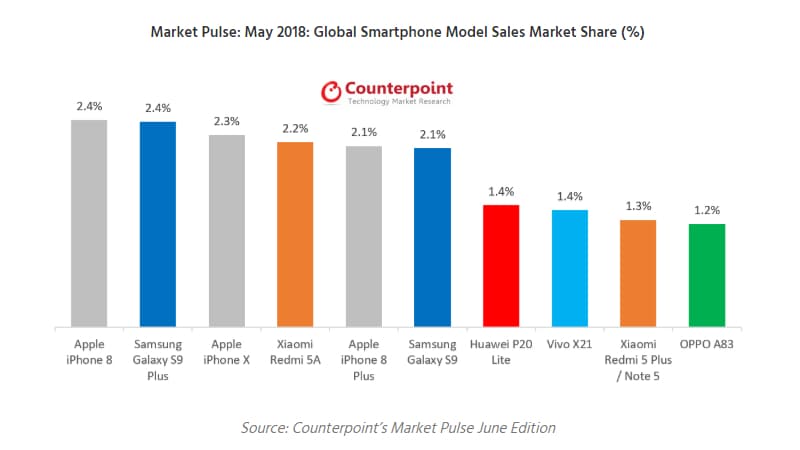 The new figures released by Counterpoint Research for the month of May make Apple the winner once again, albeit by a very thin margin. iPhone X stays at the third spot, just like April figures, grabbing 2.3 percent of market share. The report states that Apple regained the top spot in the global bestselling smartphone list due to strong promotions running up to the football World Cup accelerating sales in Europe, and steady sales in the US postpaid channels.

Xiaomi's Redmi 5A gained momentum, mostly because of its good performance in India. The device managed to grab the fourth spot with 2.2 percent market share, compared to 1.5 percent market share in the month of April. To make its presence more prominent in India, Xiaomi is planning to shift tactics from its online-only policy, and is expanding its offline presence with the new Mi Home and Mi Preferred Partner Retail in India. The contribution from offline sales increased from 30 percent in April to 35 percent in May 2018 in India.

Huawei's P20 Lite also made it to the list with 1.4 percent market share, however the entire P20 series combined (P20, P20 Pro, and P20 Lite) were among the top sellers with a 2.6 percent global market share. This share mainly is contributed by its performance in the home market and in India. The other phones that made it to the top ten were the Vivo X21 with its in-display fingerprint scanner and the Oppo A83, thanks to its brand promotions and price cuts.

Asphalt 9: Legends Available for Pre-Registration on Google Play With Rewards