Apple iPhone 6 Tipped Once Again to Include NFC Chip: Report 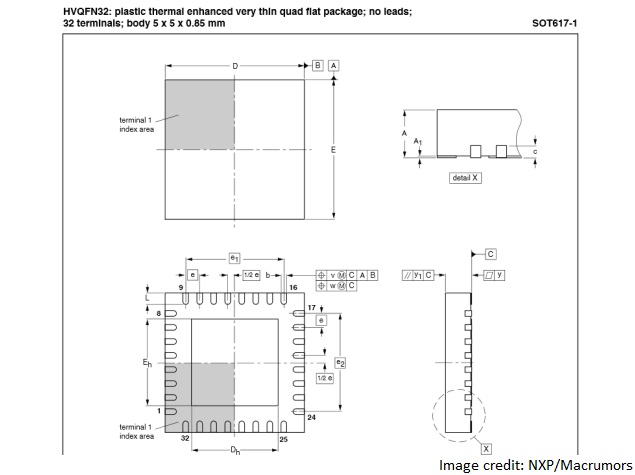 Apple is rumoured to unveil its next flagship smartphone, the iPhone 6, on September 9, and the latest addition to the list of leaks leading up to the event is new alleged evidence for the inclusion of a near field communication (NFC) chip.

The Cupertino giant has long-been rumoured to bring NFC connectivity to the iPhone, but Apple has not taken the bait yet. Now, a report by MacRumors points to evidence spotted by forum member chrmjenkins, outlining the exact location of the rumoured NFC chip made by NXP on both the 4.7-inch and 5.5-inch iPhone 6 variant's logic boards - both of which had been leaked by GeekBar.

The previously leaked NXP chip (with model number PN65V) was spotted in a leaked schematic, and was thought to be a variant of the already existing NXP PN65 chip.

The NXP document spotted by the MacRumor forum member details official schematics of the PN65 chip, with 5x5mm dimensions and with 32 terminals. This looks conspicuously similar to a square patch (see above) on the previously leaked logic boards - corroborating the evidence.

Last month, another report describing the 4.7-inch iPhone 6's logic board indicated support for NFC. The report had also claimed that the next iPhone will sport faster Wi-Fi 802.11ac along with NFC.

Notably, Apple has been long-rumoured to debut NFC support on its devices, but we instead saw it unveil the AirDrop feature for wirelessly sharing content. Now however, the adoption of NFC is being seen as a move to include mobile wallet and payment features on the next iPhone model, as the company is rumoured to launch its own mobile wallet service this year.
Comments