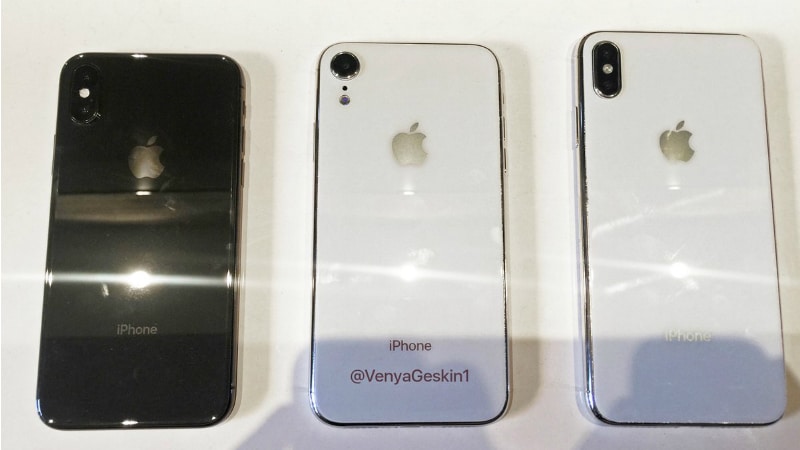 The iPhone 2018 lineup is expected to launch in September this year.

Apple's iPhone 2018 lineup is expected to become a reality in September this year, if the past decade is a yardstick to go by. But it appears that Apple has managed to keep a lid on things these year, which may be in part thanks to the internal memo that looked to curb leaks as reported in April this year. Alleged dummies of the three rumoured iPhone 2018 variants have now surfaced online giving us a look at what could be Apple's smartphone offerings for next month. Key takeaways from the leak include a single rear camera on the cheapest 6.1-inch LCD model and not much of a design departure from the iPhone 2017 lineup.

Reputed tipster Ben Geskin took to Twitter on Wednesday to give us a look at what he claims are the dummy models of the 5.8-inch, 6.1-inch, and 6.5-inch variants of the iPhone 2018 range, seen in Black and White colour options. Two photos reveal design elements from both front and back of the three smartphone models. From the front, there seems to be no apparent difference between the three except the display size. All of them appear to sport a bezel-less display, with an iPhone X-like display notch. While bezel dimensions are not clearly visible given the black-coloured front, a report from last month claims that the LCD model will have thicker bezels compared to the other two variants.

On the back, however, the dummies reveal that the 6.1-inch variant will arrive with a single rear camera and the other two premium variants are expected to get a vertically aligned dual rear camera setup just like the one on the iPhone X. However, exact camera specifications are not known. Adding to that, replies to the original tweet include multiple remarks on how the design has not been altered this time.

Earlier this week, Geskin had released similar photos of dummy models of the 6.5-inch OLED model and the cheaper 6.1-inch LCD model, of which the former is referred to as the iPhone X Plus. Other reports have also pointed towards a similar naming scheme, but anything concrete is yet to come out.