Above Avalon is a membership sustained platform that examines, and has been examining Apple since its initial days. 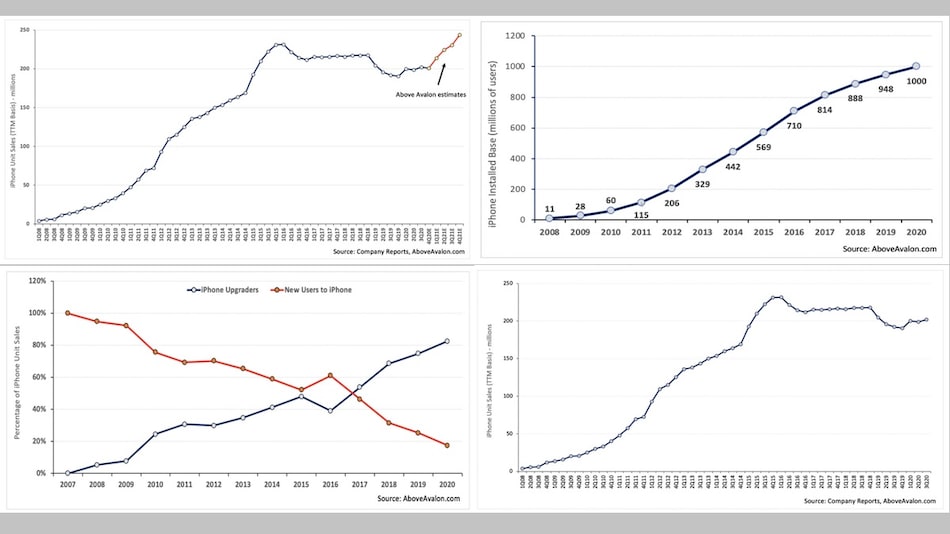 Apple has a billion active iPhone users globally, according to Above Avalon, a crowd-funded platform that has been tracking and analysing Apple. The Cupertino giant reached the milestone last month and it took the company 13 years to reach this point since the launch of the first iPhone back in 2007. The report by the crowd-funded platform states that as per estimates, Apple may reach 250 million sales in Q4 2021 which at the moment is about 200 million per a three-month period.

The analysis was carried out by Above Avalon that was founded by analyst Neil Cybart. It states that 13 years after going on sale, “the iPhone remains the perennial most popular and best-selling smartphone.” In early 2019, iPhone unit sales on a trailing twelve months basis dropped by about 12 percent compared to 2018 and went from 218 million to 191 million. But, in the second half of 2019 and the beginning of 2020, the iPhone business experienced a gradual improvement with unit sales reaching above a 200 million annual pace.

Above Avalon uses a criteria called ‘iPhone installed base' to make its analysis. It includes the total number of people using an iPhone (both new and used iPhones). While Apple has not shared the latest development about iPhone users in the world, it did state that the iPhone installed base was more than 900 million iPhones by the end of FY Q1 2019. It also points out that iPhone installed base has grown each year and recently surpassed the 1 billion mark.

Apple still brings approximately 20 million to 30 million new iPhone users per year, but the pace of growth in the iPhone installed base has slowed in the past years. This is because Apple has “already successfully targeted the premium end of the smartphone market,” as per Above Avalon.

It also suggests that Apple should have three primary priorities for the future – push the boundaries of camera technology, increase the value of owning an iPhone, and increase the number of roles handled by the iPhone, which means taking up more functions that are typically done by laptops and desktops, along with adding entirely new functions.