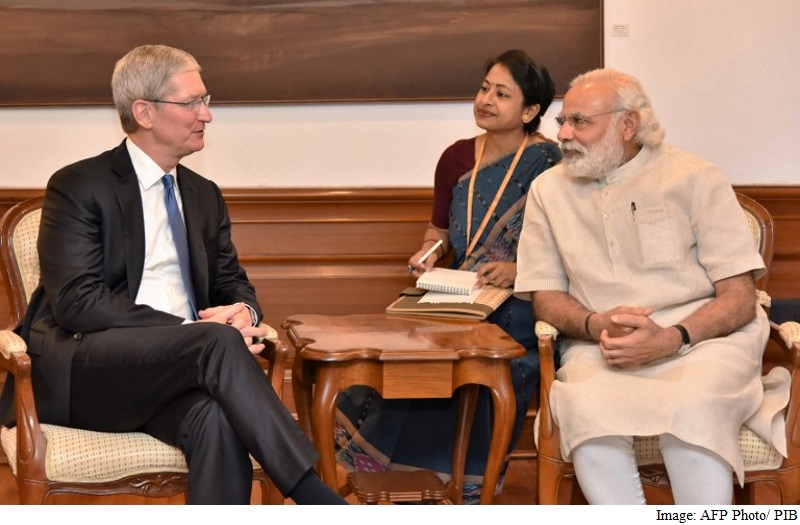 Highlights
Apple chief Tim Cook met Prime Minister Narendra Modi on Saturday, concluding a four-day trip to India that could set the stage for Apple's expansion plans in one of the world's fastest growing smartphone markets.

PM Modi and Cook met for an hour in central Delhi and discussed Apple's plans for its India business, including the possibility of manufacturing and retailing in the country.

Apple is looking to expand its retail presence in India and is pursuing a license to set up its own stores, which could start to open as early as next year.

Government officials say India is keen to get Apple to start making products in the country in what would be a boost for Prime Minister Modi's "Make in India" manufacturing push.

"Every aspect of business was discussed. Now it's for Apple to talk about their plans," a close aide of PM Modi said.

Cook's first official visit to the country comes at a crucial time as Apple looks for new growth markets after posting its first-ever decline in iPhone sales.

More than 100 million smartphones were sold in India last year and sales are expected to grow 25 percent this year, but Apple only has about a 2 percent share of the market.

The company has been pushing the Indian government to allow it to import refurbished phones in the country, but that application was turned down earlier this month.

A second source aware of the meeting said Cook asked Prime Minister Modi to reconsider the company's plans to import refurbished phones - a strategy seen key for Apple to make affordable iPhones available in a country where most smartphone sell for less than $150.

In an interview with NDTV on Friday, Cook said Apple plans to import second hand phones and refurbish them at a facility in India.

Cook spent most of the week meeting heads of India's largest companies, including telecom operator Bharti Airtel and lender ICICI Bank, but also took out time to visit a temple, dine with Bollywood stars and watch cricket.

Apple also announced plans to expand a software development centre it recently opened in Hyderabad and launched a program for local developers working on its iOS platform.

Apple has been at the centre of a debate on the role technology companies play in protecting data that led to a much-publicised dispute between Apple and the FBI over a phone linked to a shooting in San Bernardino, California.