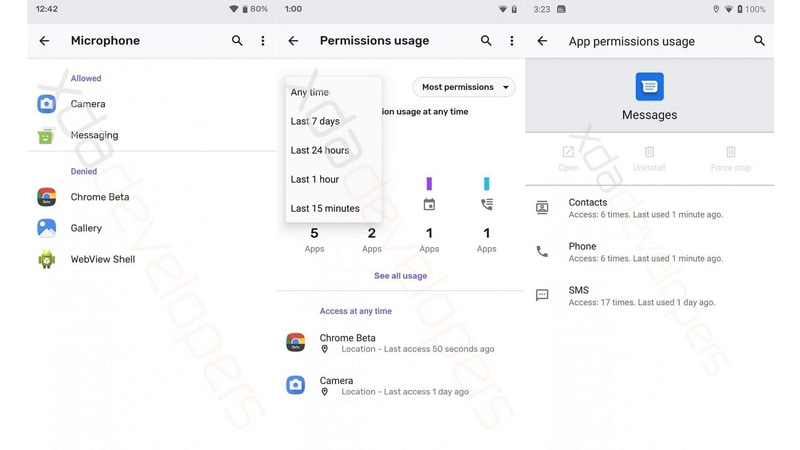 Google has been working on the next version of Android, currently referred to as Android Q. This version of Android is still under active development and is expected to have a Developer Preview sometime next month, ahead of Google I/O 2019 in May. Google has been releasing developer preview builds for quite some time now to help developers make their apps completely compatible with the upcoming version of Android. We also get our first glimpse of new features with these previews. As per leaked AOSP builds however, Android Q seems to have a higher focus on privacy and permission controls.

Folks over at XDA Developers have been running a leaked early build of Android Q and have now found a lot more features apart from a system-wide dark mode and background clipboard access, which have been in the news. As we mentioned, an earlier leak tipped Android Q will restricts background clipboard access to third-party apps. This will help users protect clipboard content from being accessed by malicious third-party apps. Through the same report, we also know that background location access could come back with Android Q.

As per the latest report on the leaked Android Q build, the new version of Android will now notify you in the status bar with an icon if an app is using the camera, microphone, or location. Clicking this icon will bring up a dialogue. Android Q is also reported to remind you via a notification if you have granted always-on access to an app for location services. Google is also reported to be bringing a new permission called ‘Financial Apps SMS Access' for banking transactions. It is possible that this service will be limited to banking apps only.

XDA Developers reports that there is a new UI page for individual permissions in Android Q that helps users to see at one glance the list of apps that have permissions and those that don't. For example, on the Microphone permissions page, you will be able to see all the apps that have the permission to access it and the ones that don't. Currently, it's a long list with different toggles. There's also a new subpage with additional usage related information which tells you which permissions have been accessed.

Android Q is also said to have a new feature called ‘Roles' that was spotted earlier and looks like a replacement for ‘Default apps'. So if an app is assigned a particular role then the said app gets all the relevant permissions for the role assigned. This allows users to assign a role to a different app without having to worry about granting the required permissions.

There are a few tweaks made to the Package Installer as well, as per the XDA report, evident when sideloading apps. Instead of the full-screen UI which takes over the screen when the app is installing, users will reportedly see a smaller dialogue box in the middle of the screen.

The phone dialler in this Android Q build also seemed tweaked which lets you block numbers that are unknown, private, pay phone numbers or any other number that's not saved in the user's contact list. Also, all apps installed on the smartphone will now show up in the launcher. XDA Developers are not sure if this is a bug or a feature but got the same outcome while trying out Pixel Launcher as well as Nova Launcher. If it is not a bug, the feature appears to be a quick way of knowing about apps installed on the smartphone even if the app is trying to hide from the launcher.

While these features are interesting, we will have to wait for Google I/O 2019 where the company is expected to full detail the new OS.