Password Checkup will be available when you use ‘Autofill with Google’. 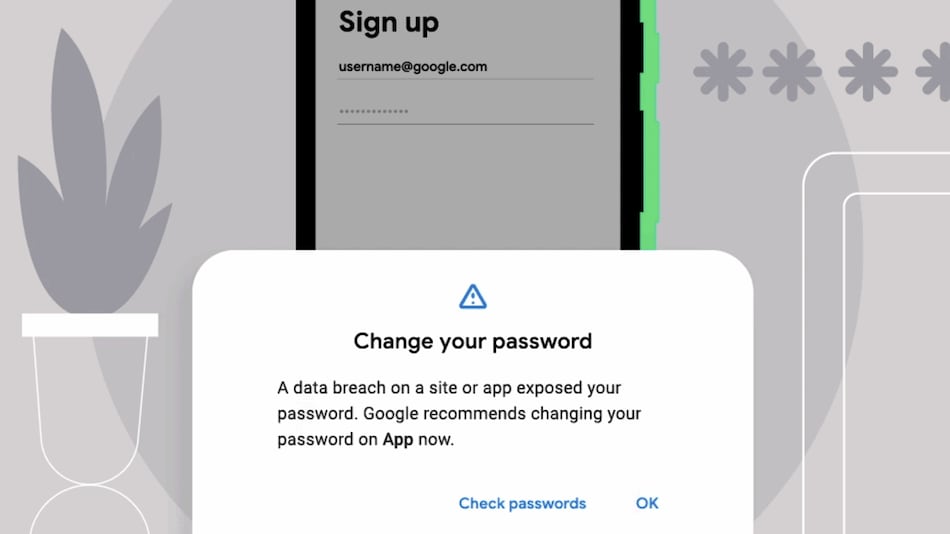 Google has announced a slew of updates for Android that includes an integrated Password Checkup for devices running Android 9 and above. The feature will inform users if any of their passwords have been previously exposed. The feature was introduced on Google Chrome back in 2019 and is aimed at letting users safeguard their credentials before signing in for services. In addition to Password Checkup, Google is updating Android with an improved Messages app that will let users schedule text messages. Accessibility-focussed TalkBack has also been updated to help the visually challenged and people with low vision. Google Assistant, Google Maps, and Android Auto are also a part of the updates that Google has announced for Android users via a blog post.

With the arrival of Password Checkup, Android users can now look at whether the passwords they are using have been previously compromised or exposed. A pop-up dialogue box will appear once ‘Autofill with Google' has been enabled that will inform users about keying in an already compromised password. It will also include a link to the Password Manager page to let you review all your saved passwords.

Google has mentioned in a blog post that Password Checkup on Android apps is available on Android 9 and above, for users of ‘Autofill with Google'. This means that you don't need to wait for any Android update on your device to get the new experience.

You can enable Autofill with Google on your device running a stock Android experience by going to Settings > System > Languages & input > Advanced and then selecting Google from the Autofill service option.

Password Checkup has already been available on Google Chrome and is a part of Google's password manager that is accessible to all users with a Google account. It was initially provided as a Chrome extension and is designed to look at usernames and passwords that have been exposed during third-party breaches to inform users if they pick any compromised or exposed passwords.

In addition to Password Checkup, Google is rolling out an updated Messages for phones running Android 7 and above with the ability to schedule text messages.

Password Checkup is coming to @Android, alerting you if a password you entered into an app has been compromised. We're also launching a new version of our screen reader with the features most requested by the blind and low vision communities, and more https://t.co/afTrOU43pB

“Just write your message as you normally would, then hold and press the send button to select a date and time to deliver your message,” Google explained in a blog post.

Google Messages has been updated with the option to schedule text messages
Photo Credit: Google

Android users have also received an updated TalkBack with more intuitive gestures, a unified menu, and a new reading control menu. These are touted to be the most popularly requested features and are aimed at enhancing the experience for visually challenged users and people with low vision. Users need to download or update the Android Accessibility Suite on their Android devices to get the updated experience.

Google Assistant on Android has also been updated with the ability to work better even when the phone is locked. You need to turn on the Lock Screen Personal Results in the Assistant setting to start using Google Assistant for setting up an alarm or playing a music track — without unlocking your phone. Once the setting is turned on, you can say, “Hey Google, set an alarm” or “Hey Google, play pop music on Spotify” to work with the Assistant when your phone is locked.

The updated Google Maps with built-in dark and light themes will roll out to all Android users globally in the coming days.

Google has also upgraded Android Auto with custom wallpapers and the ability to entertain passengers with voice-activated games such as trivia and ‘Jeopardy!' Android Auto users have also been provided with shortcuts on the launch screen to let them access contacts and even use Google Assistant by tapping on the available icons. Similarly, a split-screen interface has been offered for cars with wider screens with a real-time view of Google Maps and media controls. A privacy screen has also been offered to let you control which content should appear on the screen of your in-car system while driving with others.

The upgraded Android Auto with the list of new features will be available in the coming days on phones based on Android 6.0 and above.