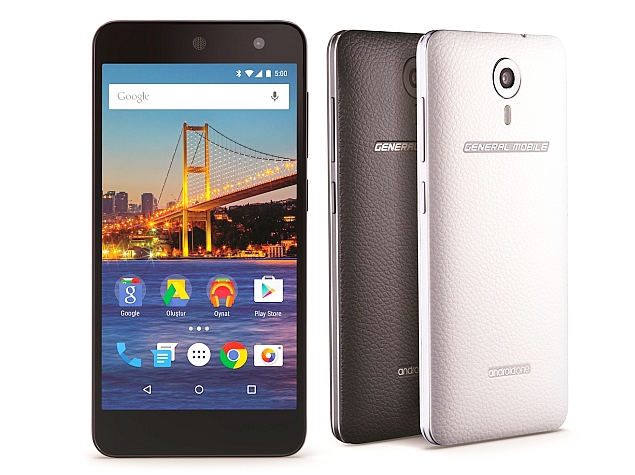 Google's Android One initiative, which was launched first in India last year, has since expanded to several Asian countries, such as Bangladesh, Indonesia, Nepal, Philippines, and Sri Lanka. Now, it has officially made its way to its first country outside Asia - Turkey.

The General Mobile 4G runs on Android 5.1.1 Lollipop, and will be available in the region starting Friday for TRY 699 (roughly Rs. 16,900). Since the handset comes with 4G connectivity, it makes the first Android One smartphone with such high speed networks.

The handset is noticeably better endowed than other Android One phones launched to date, with the 2GB of RAM and 4G connectivity the biggest draws. Google or its partners are yet to launch an Android One smartphone with similar specifications in other regions.

In February, Google started rolling out the Android 5.1 Lollipop update for Android One smartphones in India, and the update rollout for all the three smartphones, the Spice Dream Uno, Micromax Canvas A1, and Karbonn Sparkle V, was completed in March.

Google's Android One initiative is to ostensibly help OEMs save money and time in designing, choosing the right components, and pushing their smartphones to the market. It will also help Google and its partners push updates to Android devices, with optimised stock Android experiences.