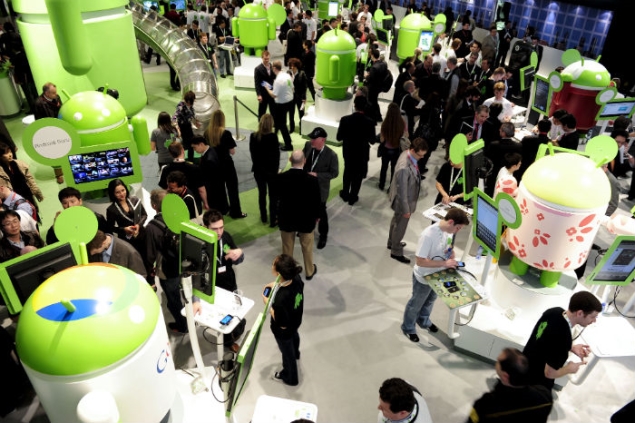 Google's Android platform was used on four out of five smartphones sold worldwide in the third quarter, while Microsoft's Windows Phone showed strong gains, said a survey out Tuesday.

Android's market share rose to 81 percent, extending its lead over Apple's iOS, used on its iPhones, according to the IDC survey. Android's share a year ago was 74.9 percent.

Even though iPhone sales grew 25.6 percent from a year earlier, the growth was slower than the overall market and Apple's share fell to 12.9 percent from 14.4 percent in the same period last year.

Windows Phone emerged as the number three smartphone platform with a market share of 3.6 percent, up from two percent a year earlier.

Windows Phone sales grew 156 percent, with more than 90 percent made by Nokia, the Finnish group whose handset division is set to be acquired by Microsoft.

BlackBerry, meanwhile, saw its troubles deepen, as its market share fell to 1.7 percent from 4.1 percent a year ago. BlackBerry sales fell 41.6 percent from a year ago despite the introduction of the new BlackBerry 10 operating system.

The overall market for smartphones grew 39.9 percent year-over-year in the quarter, to 261 million units.

The average sales price of a smartphone fell 12.5 percent in the quarter to $317, IDC said.

"Android and Windows Phone continued to make significant strides in the third quarter. Despite their differences in market share, they both have one important factor behind their success: price," said IDC analyst Ramon Llamas.

"Both platforms have a selection of devices available at prices low enough to be affordable to the mass market, and it is the mass market that is driving the entire market forward."

IDC noted that Apple's market share was likely affected by weak sales ahead of the introduction of two new iPhone models in September, at the end of the quarter. But it sold nine million of the new devices in the first weekend, suggesting a strong fourth quarter, IDC said.

IDC said larger devices called phablets accounted for 21 percent of the smartphone market, up from three percent a year ago.

"Almost all successful Android vendors have added one or more five- to seven-inch phablets to their product portfolios," said IDC's Ryan Reith.

"We believe the absence of a large-screen device may have contributed to Apple's inability to grow share in the third quarter."