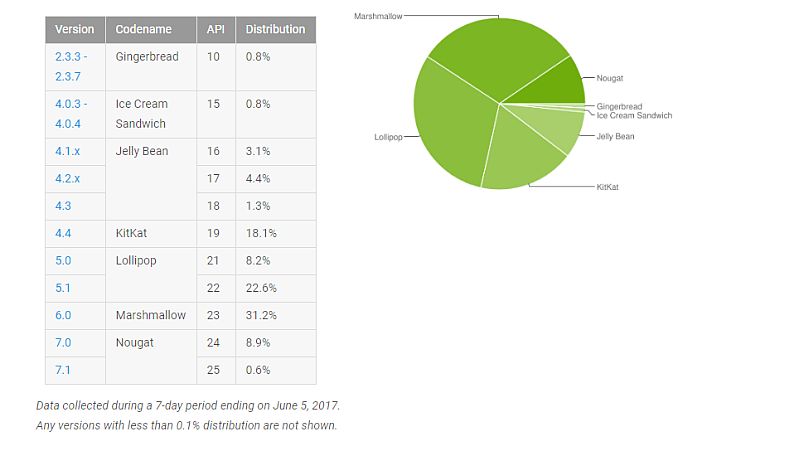 Another month and Google has released its updated Android distribution chart. The latest distribution numbers confirm that the Android Nougat is finally inching closer to the 10 percent of active Android devices.

The timing of the Android distribution numbers from Google is interesting considering CEO Tim Cook during his WWDC 2017 keynote address took a pot shot at Android. Cook on Monday showed a chart where iOS 10 was running on 86 percent of active iOS devices while Android Nougat reached the 7 percent mark as of June. Cook also referred Android's OS version fragmentation for the poor numbers. The updated list could be a way Google wants to reply back to Apple that it has inched closer to 10 percent mark, though compared to iOS 10, it's still far away.

Google has updated its Google Play distribution data for the seven-day period ending June 5. The updated distribution numbers confirm that Android 7.0 is now present on 8.9 percent and Android 7.1 on 0.6 percent devices, making the total number as 9.5. Sharing the latest distribution data of different versions of Android, Google reported that Marshmallow has a total share of 31.2 percent of Android devices that check into Google Play, which is same as May.

Other Android versions listed in the latest distribution data include Android KitKat which is running on 18.1 percent; Android Jelly Bean has a combined share of 8.8 percent, while Android 4.0.x or Ice Cream Sandwich and Android Gingerbread (v2.3.3-2.3.7), in Google's latest numbers, registered a share of 0.8 percent each. To note, the figures are gathered from devices visiting the Google Play app, which only supports Android 2.2 and above.

Google also updated its OpenGL version distribution numbers which has OpenGL 3.0 at 44.6 percent, and OpenGL version 2.0 steadily rising to 38.7 percent.