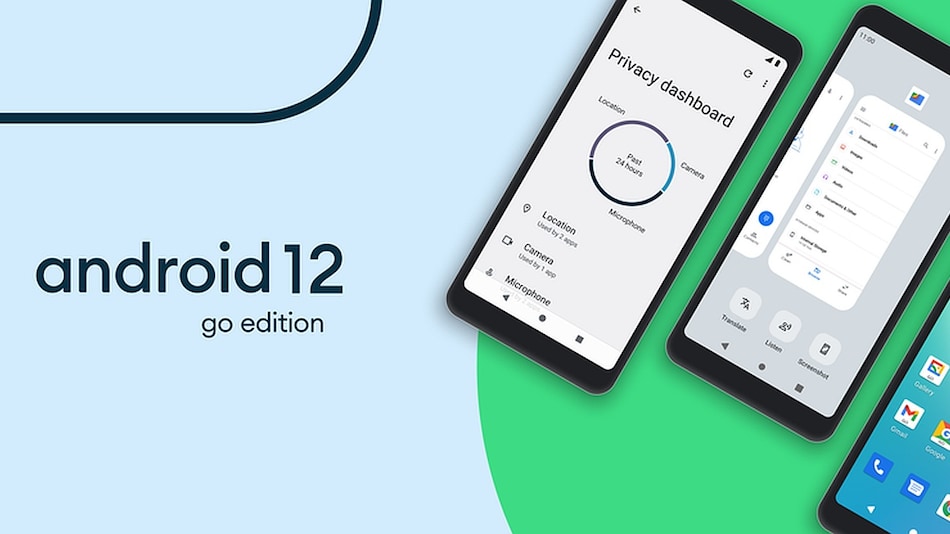 Android 12 (Go edition) has been announced by Google. The lightweight operating system (OS) is set to make its way to affordable entry-level smartphones in 2022, according to the company. The announcement comes two months after Google launched Android 12 for its Pixel smartphone lineup. Over four years since it was launched, Google says that over 200 million users are actively using the lightweight Android (Go edition) OS on their phones. The company is promising faster app launches, better privacy, improved battery longevity, new translation features, app and device sharing, as part of the next version of Android Go set to arrive next year.

With Android 12 Go, Google says that entry-level smartphones will be able to open apps faster with improved app launch times of up to 30 percent. The SplashScreen API that shows an interstitial screen with the app's icon when launching an app will also make its way to Android 12 (Go edition). The API allows an app's interface to load in the background before it is displayed to the user.

Affordable smartphones that run Android Go next year will also offer better battery life and storage, as the operating system will hibernate unused apps. The Files Go app, which is included on all Android Go handsets, will offer the ability to restore deleted files for up to 30 days, according to Google. Nearby Share and Google Play will allow users to quickly share apps directly with each other and save data.

Android 12 added important privacy enhancements, including the ability to check when apps are accessing your device and your information. Google has added the same Privacy Dashboard to Android 12 (Go edition), allowing you to check a timeline of when and which apps are accessing your location, camera, microphone, and other sensitive data protected by permissions. The new privacy indicators introduced this year will also inform Android 12 (Go edition) users about apps that are actively using the camera and microphone on their smartphone.

Google says that the Android Go system interface will also see improvements with the upcoming version, such as a quick user profile switching option on the lock screen. Meanwhile, the recent apps screen (or overview) will gain two new buttons that will allow users to translate or 'listen' to any on-screen content, like the news, according to the company.