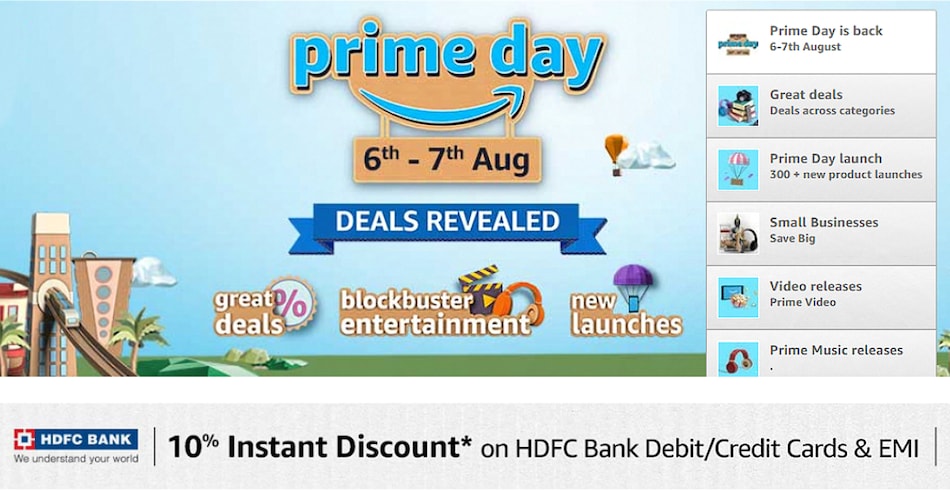 Amazon Prime Day sale will begin on August 6, and ahead of that, the e-commerce giant has offered previews on the deals to expect in the smartphones and accessories category. Amazon is looking to offer up to 40 percent off on mobiles and accessories from top brands. It has tied up with HDFC Bank for this sale to offer 10 percent off on card and EMI transactions. There is going to be up to Rs. 25,000 off on premium Samsung flagships and up to Rs. 10,000 off on Apple's iPhone 11 and iPhone 8 Plus devices.

Coming to discounts, up to Rs. 4,000 off will be listed on OnePlus devices whereas Xiaomi devices will see a price cut of up to Rs. 7,000 during the sale. Samsung's affordable Galaxy M series phones will be listed with up to six months no-cost EMI, and there's going to be up to Rs. 25,000 off on flagship Samsung devices with additional exchange offers of up to Rs. 4,000. Apple, as mentioned, will see up to Rs. 10,000 off on the iPhone 11 and the iPhone 8 Plus phones. There's also going to be up to Rs. 14,000 off on Oppo smartphones with no-cost EMI options of up to nine months. Vivo devices will see Rs. 6,000 off with same no-cost EMI benefits. Power banks, earphones, and mobiles accessories should see up to 70 percent off with mobile accessories starting from as low as Rs. 99 only.

There will be a host of Amazon Prime Day smartphone launches as well, wherein newly launched (or to be launched) phones will go on sale for the first time. This includes the Samsung Galaxy M31s, Redmi 9 Prime, OnePlus Nord, Redmi Note 9 Scarlet Red, Honor 9A, Oppo A51, and Tecno Spark 6 Air. Even the Noise Colorfit Nav smartwatch is to go on sale for the first time during the Amazon Prime Day sale.