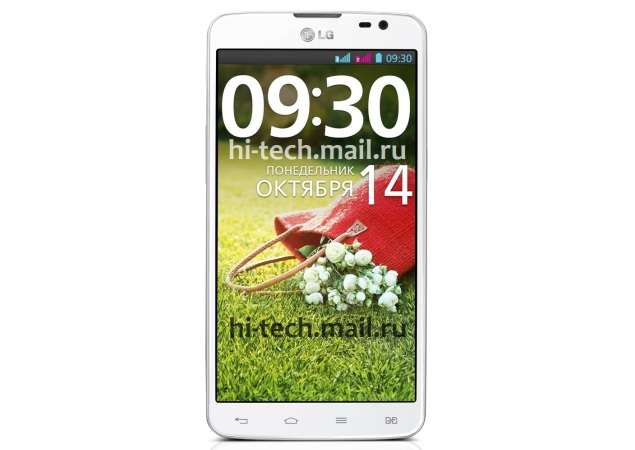 LG's former flagship offering, the Optimus G Pro, was unveiled just a few months back, and according to a report, the South Korean major is now working on a cheaper, dual-SIM variant of the device, supposedly called the LG G Pro Lite Dual.

A Russian media report has leaked an image and some specifications of the alleged LG G Pro Lite Dual smartphone. The site also claims that the cheaper, dual-SIM version of the Optimus G Pro will be launched in mid-October and would come at 12,990 Russian Rubles (Rs. 25,000 approximately) which is about half the price of the Optimus G Pro in the country.

It seems as if the specifications of the LG G Pro Lite Dual with dual-SIM functionality are different and more basic than the original version, not surprising as the phone is supposedly less expensive than the G Pro, rather than more, which would have been the case if the dual-SIM capability was being added to the Optimus G Pro's already formidable specifications.

The leaked specifications reveal that the alleged LG G Pro Lite Dual will come with 5.5-inch True HD IPS+ display with full-HD (1080p) resolution, similar to what is found on the Optimus G Pro. However, it would sport an 8-megapixel rear camera with BSI, rather than the G Pro's 13-megapixel offering. The site also reveals that a 3140mAh battery will be backing the device, which will come with dual speakers. Other features revealed include KnockOn, Guest mode, Video pause and Qslide. There is no word about the Android version, the chipset used, the amount of RAM or inbuilt storage of the device. The site has also not mentioned anything about the alleged LG G Pro Lite Dual's global availability and pricing.

The original LG Optimus G Pro was launched back in February and comes with a 5.5-inch full-HD (1080p) IPS display, 1.7GHz quad-core Qualcomm Snapdragon 600 processor and 400MHz Adreno 320 GPU. Internally, the phablet packs 2GB of RAM and 16GB of inbuilt storage that can be further expandable up to 64GB via microSD card. For camera, LG Optimus G Pro has a 13-megapixel rear camera with LED Flash and 2.1-megapixel front-facing snapper. It runs on Android 4.1.2 (Jelly Bean) along with a layer of Optimus 3.0 UI.