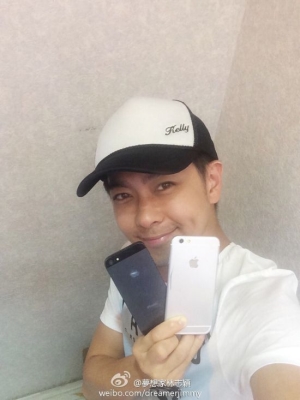 With each passing day Apple's iPhone gets tipped in new leaks. The smartphone is expected to be called the iPhone 6 and likely to come in two display size variants - 4.7- or 5.5-inch - larger than the current 4-inch panel. The latest leak comes from a Taiwanese celebrity named Jimmy Lin, who had earlier leaked an image of the iPhone 5c ahead of its launch last year.

Lin has shared an image of himself holding two iPhone devices - an iPhone 5 in Black and another smartphone, claimed to be the iPhone 6, in Silver colour. Lin posted the image, first spotted GforGames, on Sina Weibo, which is the Chinese micro-blogging equivalent to Twitter, and also shared his first-hand experience with the alleged iPhone 6.

According to Lin, the alleged iPhone 6 with 4.7-inch display has a great display and is easy to grip despite of its large display size. Further, in-line with earlier leaks, Lin notes that the rumoured iPhone 6's sides houses the power button positioned on the right panel of the device, instead on the top panel seen on current iPhone models. Meanwhile, the side panel houses slightly modified volume buttons on the alleged iPhone 6. 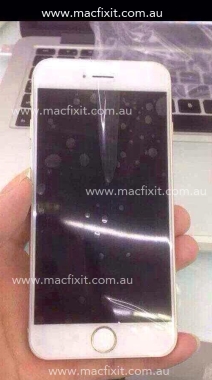 In addition, Macfixit has posted a bunch of images which it claims to be of an unannounced iPhone 6. The purported leaked images of the iPhone 6 confirm what has been widely expected based on earlier leaks, that the iPhone 6 will take design cues from Apple's current generation iPod touch. The leaked images also suggest that the next generation iPhone would come with curved edges.

A report emerging from Taiwan claimed that Samsung had cut the Q3 supply chain orders for its 2014 flagship smartphone, the Galaxy S5, by 25 percent. The reason behind this cut was said to be the next iPhone model which is expected to launch in a few months.