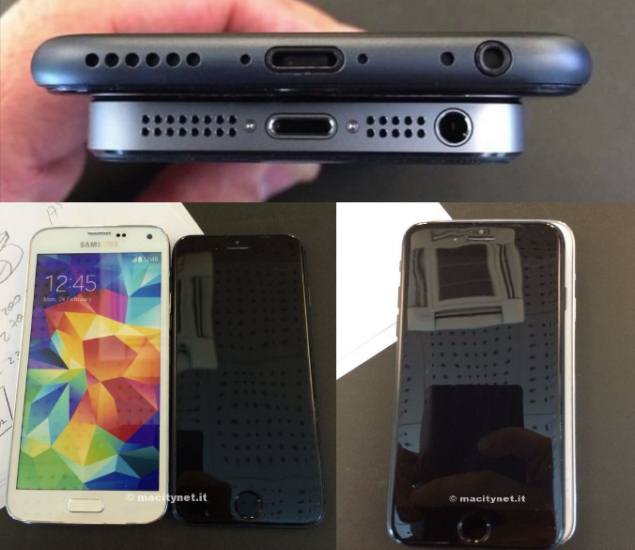 So far, Apple's alleged iPhone 6 smartphone has been spotted in various mock comparisons. Now the latest comparison pits the alleged dummy of the iPhone 6 against the Samsung Galaxy S5 and iPhone 5s.

An Italian website, Macitynet.it, has published a number of images that are said to be an alleged dummy of iPhone 6 with just 6.1mm thickness. This website has compared this dummy to the existing iPhone 5s (which measures 123.8x58.6x7.6mm), clearly showing the difference in size, thickness and more.

Earlier the website had posted images of the same iPhone 6 dummy with rounded edges and an overhauled design.

The Italian website this time has gone ahead of the previous leaks and even compared it the recently launched Samsung Galaxy S5 (Review I Pictures). The alleged wider, thinner dummy of the iPhone 6 seems to feature a 4.7-inch display, and is slightly shorter than the Galaxy S5 in side by side comparison. It is also thinner than the Galaxy S5, which is 8.1mm thick.

Further, the Japanese blog claimed that Apple, in favour of an all-aluminium design, will get rid of rear glass antenna windows currently seen on the iPhone 5 (Pictures) and iPhone 5s (Pictures).

Later, a French website showcased an alleged black-coloured dummy of the handset, following the same lines as Squair claimed.
Comments