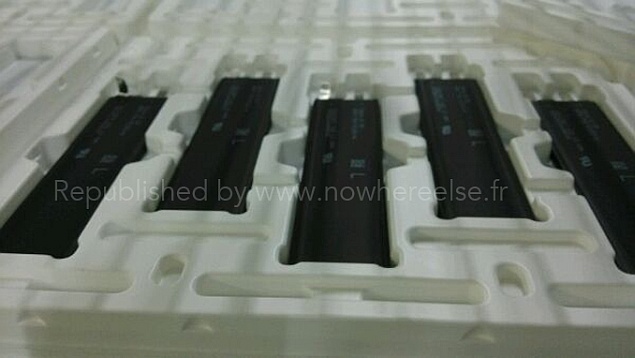 Adding to the long list of leaks and rumours regarding Apple's next iPhone model, expected to be called iPhone 6, we have now come across an image claimed to show the battery for the smartphone.

The image from Nowhereelse, a French website, shows the rumoured iPhone 6 smartphone's battery design, indicating a larger handset with a bigger screen in the Cupertino firm's pipeline. Adding to this, Phonearena mentions that the iPhone 6's production trial will start in

the month of May, and will include a battery with no more than 2000mAh capacity. It has been also mentioned that the charging pins have been redesigned.

The elongated battery hinting at a larger screen in the iPhone 6 is in line with the previous reports and leaks for Apple's next-generation iPhone. The images that leaked couple of days ago show the handset's alleged mould along with its purported front panel.

If the numerous recent leaks and rumours are correct, then the iPhone 6 would be surpass the existing Apple iPhone 5s' screen size of 4-inches, and will arrive in two screen sizes - 5.5-inch and 4.7-inch.

While the high-end 5.5-inch iPhone model was previously reported to boast of a higher screen resolution at 1080x1920 pixels (full-HD), with a pixel density of 401ppi, the 4.7-inch model is said to pack a lower resolution screen at 750x1334 pixels and might offer a pixel density of 326ppi.

However, all these leaks should be taken with a pinch of salt as Apple has not mentioned anything about the upcoming device, and the image's legitimacy remain questionable.