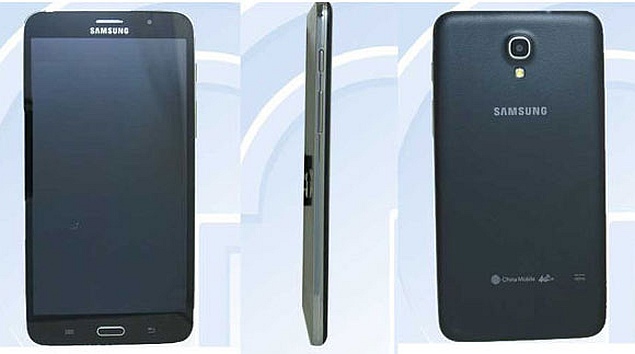 Samsung seems to have a 7-inch device in its pipeline, as some alleged images and expected specifications of such a device have popped-up online.

The alleged 7-inch Samsung device, said to be a part of the Korean tech firm's Galaxy Mega smartphone series, appeared at Tenaa, a Chinese electronics certification website, and was first spotted by Bestmobs website.

The spotted 7-inch device is codenamed Samsung SM-T2558, and is surprisingly said to be a smartphone instead of a tablet. We will treat it as a tablet with voice calling functions however, with smartphone-tablet hybrids or phablets defined by us as those voice-calling devices with a screen size less than 7-inches.

The three listed Tenaa images of the SM-T2558 show the front, back and right side of the black-coloured device, with a similar design to what Samsung used on the Galaxy Mega 6.3.

The Tenaa listing of the Samsung SM-T2558 also displays some hardware specifications apart from images, however, the configuration of the yet-to-be-announced device may be altered by the time it gets officially released.

The alleged Samsung Galaxy 7.0 SM-T2558, as per the Tenaa listing, runs on a quad-core processor clocked at 1.2GHz, coupled with 1.5GB of RAM. Other specifications include Android 4.3 Jelly Bean OS; 8-megapixel rear camera and 2-megapixel front-facing camera, as well as 8GB of inbuilt storage with support for microSD card expansion. The device is seen in two iterations, based on 3G (TD-SCDMA) and 4G (TD-LTE) connectivity respectively.

There is no word of the Samsung SM-T2558's price, availability or release dates. However, since the voice-calling tablet is seen on a Chinese certification website, it might arrive in the same region. The specifications also seem to be average and not something to flaunt, which we assume will keep the prices within a budget consumer's reach.