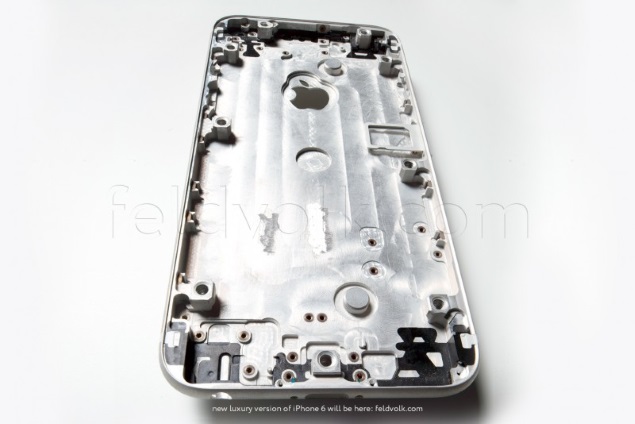 Apple's next generation iPhone, which is expected to be called the iPhone 6 and has been the subject of numerous leaks, has once again been purportedly leaked in new high-resolution images by a Moscow-based firm which sells modified luxury versions of the iPhone devices.

The bunch of images leaked by Feld and Volk, first reported by MacRumors, claim to show the purported rear shell of the 4.7-inch iPhone 6 model in high-quality images. Notably, the firm has also posted a YouTube video of 1 minute and 24 seconds that shows the unannounced handset's rear shell in full glory.

The new video and images that have surfaced online clearly show the internals of the alleged iPhone 6 rear shell that will include the various components of the device such as the antenna. The new bunch of leaked images from the rear shell of the alleged 4.7-inch iPhone 6 model, while not offering much detail about the rear, do show cut-outs on the purported iPhone - one, for housing the rear camera with flash, and the other, for the Apple logo branding in the middle - which are both in-line with a previous leaks. Some of the leaked images even show black and white-coloured iPhone 6 models with their sides having cut-outs for power and volume rocker buttons, as rumoured for some time now.

In addition, MacRumors cites Feld and Volk claiming Apple has been of late working with the same sapphire suppliers with which the company used to work.

Recently, the battery capacity of the rumoured 4.7-inch and 5.5-inch models were tipped in a leak, and we were also treated with a new YouTube video purportedly showing the alleged iPhone 6's display, claimed to be made of sapphire material, being tested.