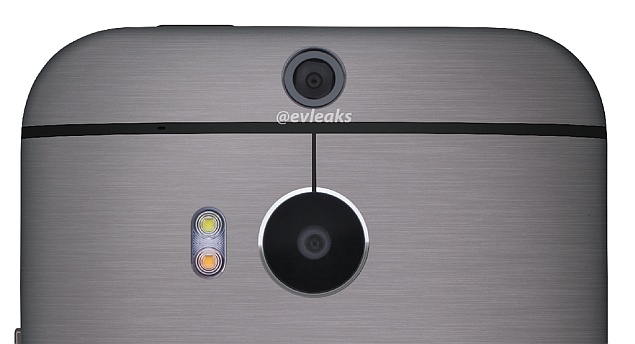 With the 25 March 2014 announcement of the 'All New HTC One' just a couple of weeks away, a new purported press render of the handset has emerged online detailing its camera setup.

The purported leaked 'All New HTC One' image by @evleaks, seemingly a press render, shows the upper half body of the smartphone's back panel. The images shows the camera lens surrounded by a metal rim, alongside a dual-tone LED flash, similar to that seen in Apple iPhone 5s.

Also visible in the leaked image is another lens placed on top of the first, but its purpose is still unclear. The extra lens placed on top, according to some theories might enhance the All New HTC One's camera by offering different depth of fields while shooting a video or capturing an image.

Additionally a small bulge is seen on top and on the side, which we assume is the lock key and volume buttons respectively. However, the camera microphone placement on the new HTC One handset might shift from the right to the left side (as seen on the original HTC One), and be placed on the what seem to be cleverly designed antenna lines.

HTC teased its dual-camera earlier this week, in a Facebook post. The Facebook image is divided into two rows with three images each, that variously show two dogs, two cups of coffee, two people, two water drops, two trees and two giraffes, all of which indicate the arrival of the handset's dual-camera.

In a recap of previously rumoured specifications, the All New HTC One handset (aka HTC One+, HTC One Two, HTC One 2014, HTC M8) is expected to feature a 5-inch full-HD display, a quad-core Qualcomm Snapdragon 800 MSM8974 processor coupled with 2GB of RAM, and Sense 6.0 UI on top of Android 4.4 KitKat. A 2.1-megapixel front camera is also speculated.

Gorilla Glass cheaper and stronger than sapphire claims Corning executive
Looking for a place to pee? Airpnp is like Airbnb for toilets