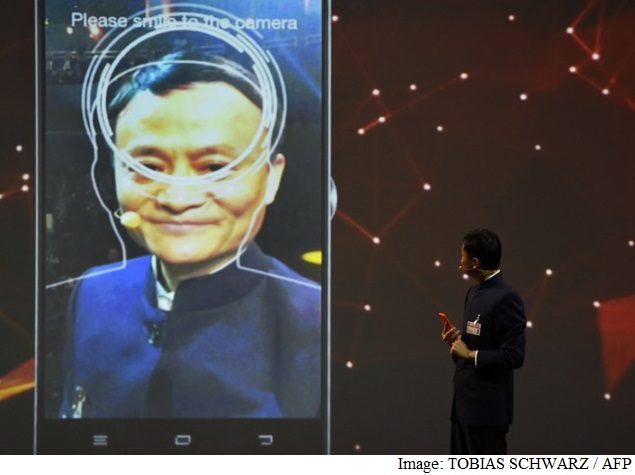 China's Internet tycoon Jack Ma, founder of giant online merchant Alibaba, gave a glimpse of the future when he demonstrated a new e-payment system using facial recognition at the CeBIT IT fair in Germany.

Criss-crossing the stage in the style of a Silicon Valley pioneer late Sunday, Ma showed off the technology that uses facial recognition from a smartphone camera selfie as a digital signature, saying he had just used it to send a gift to the mayor of the event's host city of Hanover.

Ma, a former teacher, is known for thinking big, and at this week's CeBIT he was the keynote speaker, addressing an audience that included German Chancellor Angela Merkel.

Like many other companies from the event's official partner country China, Alibaba flush with cash from a massive stock listing is looking beyond the borders of its huge domestic market of 1.2 billion people, to the world.

Ma enthused that, while the industrial revolution freed workers from hard labour, the digital "revolution... liberates the strength of the human brain".

Ma has not hidden his global ambitions and has cited as his models global companies such as Wal-Mart, IBM and Microsoft.

In January at the World Economic Forum in Davos he said his target was two billion Alibaba users worldwide, compared to 334 million "active buyers" in December, and a global version of Taobao, the sales site that cemented his dominance in China.

Global ambitions
Some observers think Alibaba could one day rival the US online giants eBay and Amazon, or just buy them.

"Many people think that's a road that they may pursue, since it would be so expensive to build their own brand (in the US)," said Zia Daniell Wigder, vice-president of Forrester Research.

"Simply making a name for yourself in a market where the leaders have been established for a long time is going to be difficult.

"It is more likely that Alibaba conquers emerging markets with still nascent online trade while prudently strengthening its presence in developed countries."

The head of German IT industry group BITKOM, Dieter Kempf, said about Alibaba that "the success is impressive, even if it is in large part because suppliers face a very large, hungry Chinese market".

Asked whether it could become a true global player, he said: "I think we will have to see. Someone who can operate successfully in a large domestic market is not necessarily a good exporter... it really depends on the individual solutions."

The Chinese giant has already launched an online auction site in the US, called 11main, challenged Amazon in the field of cloud computing with a service called Aliyun, and invested $200 million (roughly Rs. 1,256 crores) in Snapchat, a photo-sharing application.

Bryan Wang, Beijing-based analyst for the consultancy Forrester Research, said it was an early attempt by Alibaba to try to "understand digital consumers on a worldwide scale, outside of China".

Last September, the Hangzhou-based group raised a massive $25 billion on the NYSE, although the share price has since fallen below the listing price.

Digital ecosystem
Founded in 1999, Alibaba has based its success on Taobao "look for treasure" in Mandarin and Tmall, a gigantic virtual mall that has become so dominant that even Amazon has opened up shop there.

Like Google, Alibaba capitalises on the analysis of user data. It does not charge commission to individuals but derives its profits from advertising options it offers to improve their visibility.

The volume of annual trade carried on its platforms, still mostly within China, exceeds that of eBay and Amazon combined.

Alibaba operates its own online payment system Alipay, and has received approval from Beijing to open a private bank. It also offers a navigation system, an online tour operator, and a music streaming service, among other things.

"Alibaba is not only an e-commerce platform, it is the largest digital ecosystem in China," said Wang. "Wherever you are in China, Alibaba actually knows your behaviour."

But Alibaba still faces other challenges it has been accused of not doing enough to eliminate counterfeits sold on its platforms.

If Alibaba wants to internationalise, said Kitty Fok, analyst at the consultancy IDC, "the number one concern is that people buy something that's actually worth their money."