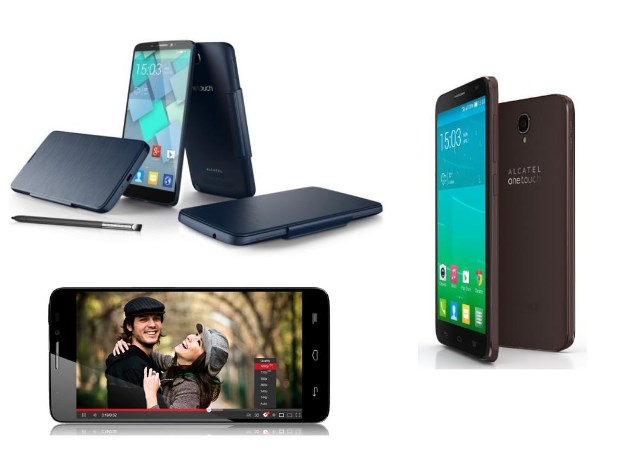 Alcatel One Touch has launched five smartphones and two feature phones in India.

The Hero will have innovative software features which take advantage of the stylus, including handwriting recognition and annotation. Two apps can run simultaneously in tiles. Accessories will include a magnetic flip cover with an e-Ink display, a dock, and a Bluetooth headset the size and shape of a basic feature phone with its own numeric keypad.

The Alcatel One Touch Idol series includes the Idol X, Idol Mini, Idol 2 and Idol 2 mini. These models have screens ranging from 4.3 inches to 5 inches, and have narrow bezels. Single-SIM and dual-SIM variants of each model will be available.

All the models come running Android 4.2, but updates to Android 4.4 will be available. Alcatel One Touch has not released specific pricing information but states that the price range is Rs. 10,000 to Rs. 30,000.

Two feature phones were also released. The Alcatel One Touch 20.05 is a basic candybar with a 2.4-inch colour screen and numeric keypad. It supports SIM card hot-swapping, microSD cards, and EDGE data. It comes in glossy metallic colours and has a 2-megapixel camera.

The Alcatel One Touch Tribe 30.40 is a basic phone with a 3.5-inch touchscreen, 2-megapixel camera, Wi-Fi b/g/n, Bluetooth 3.0, EDGE data, and an unspecified custom OS with its own app store.

TCL will focus on the south and west regions for now and expand its Alcatel One Touch brand to the rest of the country in the future.