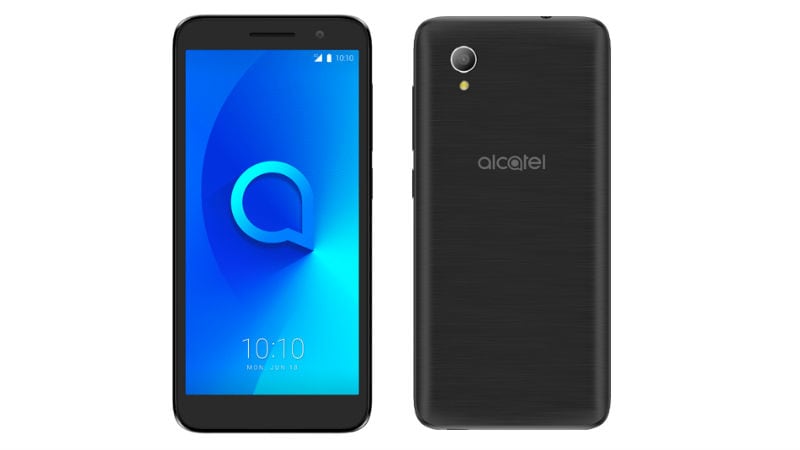 Alcatel 1, the budget smartphone that was spotted online last week, has now been officially launched by the company. The smartphone is the latest addition to the Alcatel 1 series of budget smartphones that was unveiled by the TCL-owned brand earlier this year. The first handset in the lineup was Alcatel 1X, which was introduced as one of the first Android Go smartphones. It features Android 8.1 Oreo (Go edition) alongside a suite of pre-installed Google apps that are designed to deliver an optimised user experience despite using budget hardware. Similarly, the Alcatel 1 is also arriving with identical features, at a lower price point. The key features of the latest smartphone from Alcatel include a FullView display with 18:9 aspect ratio, a MediaTek MT6739 processor, 1GB of RAM, 2000mAh battery, and more.

Alcatel 1 price has been set at EUR 79/ $89 (roughly Rs. 6,200) It will be available in select markets starting July 2018, but there is no clarity on the exact countries and regions where the smartphone will arrive. Notably, colour options include Metallic Black, Metallic Blue, and Metallic Gold.

In terms of optics, the Alcatel 1 comes with a 5-megapixel rear camera that can be interpolated to 8-megapixel. It comes with LED flash, and other features like Social Square, Instant Collage, One-Handed Mode, and Photo Booth. At the front, there is a 2-megapixel front camera.

The Alcatel 1 is equipped with 8GB of inbuilt storage, expandable via microSD card (up to 32GB). Connectivity options include 4G LTE, Wi-Fi 802.11b/g/n with Wi-Fi Direct, Bluetooth 4.2, a Micro-USB port, and GPS/ A-GPS. Sensors onboard the handset are accelerometer and proximity sensor.