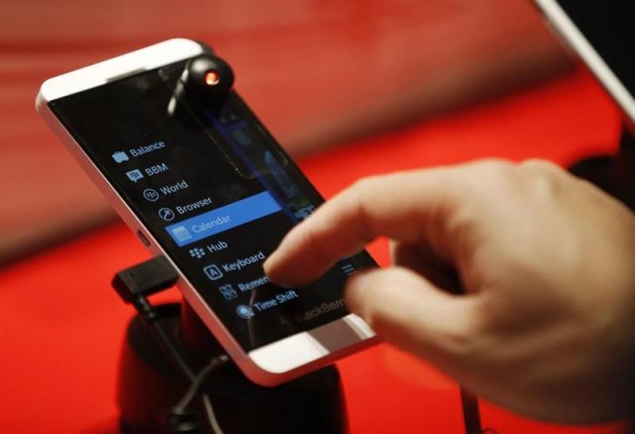 BlackBerry Ltd warned on Friday it expects to report a huge quarterly operating loss next week and that it will cut more than a third of its global workforce, rekindling fears of the company's demise and sending its shares into a tailspin.

The company, which has struggled to claw back market share from the likes of Apple Inc's iPhone and Samsung Electronics Co Ltd's Galaxy phones, said it expects to report a net operating loss of between $950 million and $995 million in the quarter ended August 31, due to writedowns and other factors.

The results will put more pressure on BlackBerry to find a buyer for either some parts of the company, or for all of it. It said last month it is weighing its options, including an outright sale, in the face of persistently lackluster sales of its new smartphones, which run on the BlackBerry 10 operating system.

"The company has sailed off a cliff," said BGC Partners analyst Colin Gillis. "What do you expect when you announce you're up for sale? Who wants to commit to a platform that could possibly be shut down?"

The company said it plans to shave its operating costs by some 50 percent over the next nine months, as it aims to focus its attention on the enterprise market and become a more niche player. But some analysts are skeptical that the company can cut its way back to prosperity.

"We believe the most likely outcome is a break-up or sale in total or in parts," said UBS analyst Amitabh Passi.

A source at a potential suitor said the warning on Friday may speed up the sale process, but it also adds more risks.

"I think most will view it as pretty scary. It's a melting ice cube," said the source.

The Wall Street Journal, citing unnamed sources, on Friday said the company's former head Mike Lazaridis has been talking with private-equity firms about possibly mounting a joint bid for the struggling smartphone maker.

Lazaridis, who owns a 5.7 percent stake in the company, has reached out to private equity firms that include the Blackstone Group and Carlyle Group, said the report.

The company had bet much of its future on the popularity of the Z10 touchscreen device - the first of the smartphones to be powered by its new BlackBerry 10 operating system. While the device drew favorable reviews, it has failed to gain traction among consumers since its introduction earlier this year.

For the second quarter, the company expects to have sold about 3.7 million BlackBerry smartphones to end users. BlackBerry said it is changing the way it accounts for device sales, now booking revenue only after a device is sold to the end customer, and not to carriers.

Worryingly, most of the unit sales being recognized in the quarter are older-generation BlackBerry 7 devices. The company said it could not recognize BlackBerry 10 devices shipped in the quarter until those devices are sold through to end customers. That suggests carriers have been having difficulty moving the new line of devices.

Major job cuts
BlackBerry said it expects its adjusted net loss, before giving effect to the inventory and restructuring provisions, will be in a range of about $250 million to $265 million, or a loss of 47 cents to 51 cents a share.

BlackBerry sees about $1.6 billion of revenue in the second quarter, of which roughly 50 percent is expected to be revenue from its services unit.

Analysts, on average, had forecast a loss of 15 cents a share on revenue of $3.06 billion, according to Thomson Reuters. "The revenue and device shipment numbers are pretty surprising given how weak it is," said UBS analyst Passi. "I think many of us were expecting a pretty difficult quarter, but this is much worse than we anticipated."

The company, which had warned that job cuts were in the offing, plans to shed 4,500 jobs. BlackBerry has already undergone a major round of job cuts over the last 12 months. It employed 12,700 people as of March, and once had close to 20,000 employees.

BlackBerry said its cash position as of the end of the fiscal second quarter is estimated to be about $2.6 billion, down from about $3.1 billion three months earlier.

"It makes it even more difficult for somebody to step in and buy the company. If you look at what's been happening, they've burnt through approximately half a billion dollars in cash in the last three months," said Veritas Investment Research analyst Neeraj Monga.