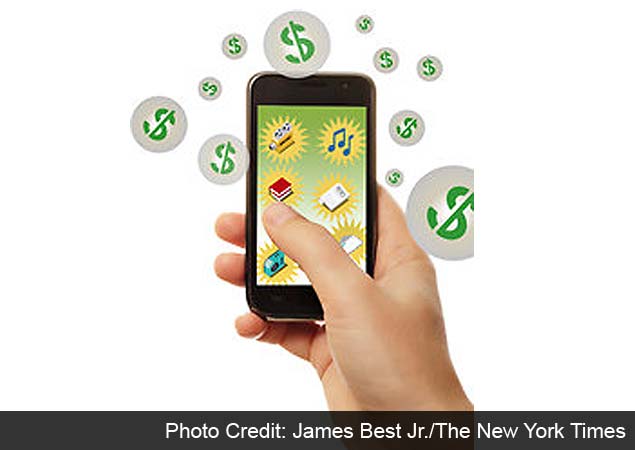 Say you are in a strange city and need a hotel for the night. You pull out your phone, search for hotels on Google and see a nearby one listed at the top of the rankings, with a little phone icon that says, "Call." You tap it, reach the hotel and ask for a room.

And just like that, Google made money. That icon was a so-called click-to-call ad, and the hotel paid Google for it when you called.

As more of us have access to the Internet and apps through our cellphones and tablets, advertisers are looking for new ways to reach us there.

Some mobile ads remain just miniature versions of ads on Web sites, an echo of the early days of the Internet, when advertisers essentially slapped print ads online. But increasingly, advertisers are tailoring ads to phones by taking advantage of elements like their ability to track location, make a call, show maps with directions and add calendar alerts.

The stakes are significant for an industry that is still finding its way in the mobile world. Advertisers will spend a relatively small amount of money on ads on phones and tablets this year $2.6 billion, according to eMarketer, less than 2 percent of the amount they will spend over all. Yet that is more than triple what they spent in 2010.

"An ever-growing percentage of our ad buy is mobile because that's where the consumer is," said Chris McCann, president of 1-800-Flowers.com, which has run mobile ads urging people to call or walk into a nearby store. "It's the future for us."

Coming up with ads that exploit the smaller mobile screen requires inventiveness from many parties - advertisers; digital publishers like Google, Apple and Facebook that sell ad space; and mobile ad networks like Millennial Media.

"What we're trying to do is think about the on-the-go user," said Jason Spero, leader of global mobile sales and strategy at Google, which dominates advertising online and is far and away the leader in mobile advertising. "What does that user want when she's sitting in a cafe or walking down the street?"

A big challenge for the tech companies is that advertisers pay less for mobile ads than for those online, largely because consumers are less likely to make a purchase on their phones. Though people click on mobile ads more than on desktop ads, advertisers wonder whether that is because of what they call the "fat finger effect" accidental clicks on tiny touch screens.

And while users' actions can be tracked across Web sites online, it is hard to know whether someone sees a cellphone ad for an offline business and then walks in so it is difficult for advertisers to judge how effectively they are spending their money.

As Google sells more mobile ads, the average amount it earns from each ad has dived. Facebook's value on Wall Street was halved on fears that it was not making enough money on its mobile users. Apple's mobile ad network, iAd, has been slow to gain traction.

Despite the problems, though, there is evidence that mobile advertising is becoming a meaningful business, and in some cases a bigger business than online advertising.

Google earns 56 percent of all mobile ad dollars and 96 percent of mobile search ad dollars, according to eMarketer. The company said it is on track to earn $8 billion in the coming year from mobile sales, which includes ads as well as apps, music and movies it sells in its Google Play store. But the vast majority of that money comes from ads, it said.

Google and others have had success in taking advantage of the fact that mobile phones know a lot more about people than desktop computers do - most important, their location. And with a phone in hand, a customer is probably more likely to be ready to buy something.

People searching on a computer for jeans, for instance, most likely want to research styles and colors, while people doing the same search on a phone want the nearest place to buy a pair, said Mr. Spero at Google.

In addition, Google has benefited from the fact that one main way people use Google on phones is to search for nearby businesses, a prime source of advertising. Thirty percent of restaurant searches and 25 percent of movie searches are done on mobile devices, according to Google.

One of Google's most successful mobile ad types is the click-to-call ad. After running these ads, Starwood Hotels' mobile bookings grew 20 percent in a month.

Google also shows ads on the mobile version of YouTube, including video ads like movie trailers before YouTube videos. If someone watches the movie trailer, Google makes money.

The company has also hinted that it could show ads through other services like Google Now, which sends unprompted alerts to cellphones. It coaches advertisers on how to do things like build mobile Web pages.

"We want a seamless experience that goes across mobile, desktop and TV, and that's what we're building," he said.

An audio ad, for example, told Pandora listeners to tap the screen for the location of the nearest Whole Foods and a sushi lunch special. StubHub, the online ticket marketer, recently ran an ad on Pandora's app. Those who clicked on it received reminders for coming concerts to their cellphone calendars.

Gaining traction in mobile advertising is particularly critical for Facebook; 60 percent of its users log in on phones. But making the transition to the small screen has been a challenge: most Facebook ads appeared on the right side of the Web page, so there was nowhere to show them on a mobile device.

That is one reason Facebook started running ads in the newsfeed, like sponsored stories, which are notices that a friend likes a certain brand. It is also starting a mobile ad network to show ads on other cellphone apps, based on things Facebook knows about a user, such as what they like and where they live.

Samsung showed an ad just to people using its Galaxy Note device, directing them to search and download Android apps for the phone.

Next, these companies must figure out how to persuade advertisers to spend more than 2 percent of their budgets on mobile devices.

"It's reminiscent of the Web in 1996, '97," said Michael Moritz, an investor at Sequoia Capital who financed companies like Google and LinkedIn. "People weren't interested in ads, and prices were low. But advertisers don't have a choice. They've got to go where audiences are."