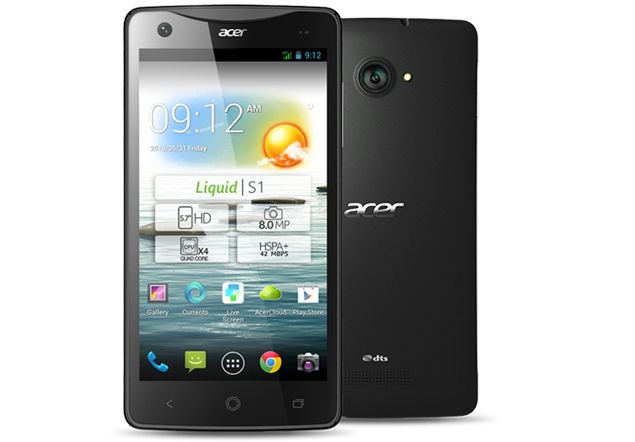 Acer has announced a new large screen Android smartphone, the Liquid S1, at Computex in Taipei.

The Acer Liquid S1 sports (via Engadget) a 5.7-inch screen that has a resolution of 720x1280 pixels. The phone which will also offer a dual-SIM option, will be powered by a 1.5GHz Mediatek quad-core processor and have 1GB of RAM. The phone runs Android 4.2 Jelly bean, the latest iteration of the operating system. The phone comes with 8GB of internal storage expandable up to 32GB via microSD card. It comes with a 2400mAh user replaceable battery. The phone sports front and rear cameras though the resolution has not been revealed yet.

The phone's user interface includes several tweaks including Acer Float that allows several app windows to stay open so users can multitask without having to back out of one app to work on another, similar to the Galaxy Note II's multi-window feature. The Float Apps shortcut can be invoked by pressing a key following which apps on a translucent screen float over the function being used. The float apps include Camera, Maps, Calculator and Notes. A Float Caller notification is also present to ensure that users will not be interrupted by incoming calls that take over the full screen. When a call comes in, the Float Caller mini-window pops up and the user can choose to take the call or reply with a quick message.

The Acer Liquid S1 will start shipping in Q3 2013 in France, Belgium, Netherlands, Ukraine, Russia, UK and Germany, followed by Spain and Italy with a starting price of 349 Euros.